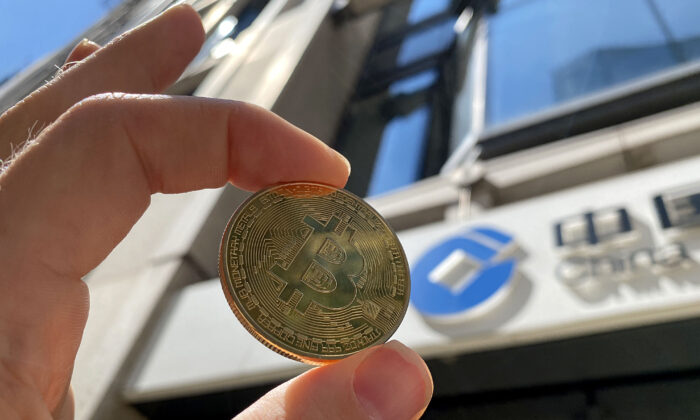 In this photo illustration, a visual representation of bitcoin cryptocurrency is pictured in London on May 30, 2021. (Edward Smith/Getty Images)
Cryptocurrency

Nearly 90 percent of national central banks are planning to launch their own central bank digital currencies (CBDC) to the general public, according to a new report (pdf) from the Bank of International Settlements (BIS).

BIS surveyed 81 central banks in fall 2021 regarding their engagement in CBDC work as well as their motivations and their intentions regarding CBDC issuance.

According to the report, a record number of banks are engaged in “some form” of CBDC work, and an increasing number are in the “advanced stages” of exploring digital currency.

“Over the past year, the share of central banks actively engaged in some form of CBDC work grew to 90 percent,” the authors wrote. “The survey data show that central banks are particularly interested in retail CBDCs: all central banks conducting work on CBDCs either look at both wholesale and retail, or focus solely on a retail CBDC.”

Of those, 62 percent are “conducting experiments or proofs-of-concept” to demonstrate its feasibility.

No central bank is focused solely on a wholesale CBDC, the authors noted.

Compared to 2021, the share of central banks that are currently developing or running a pilot program for a CBDC has almost doubled from 14 to 26 percent.

“Both Covid-19 and the emergence of stablecoins and other cryptocurrencies have accelerated the work on CBDCs–especially in advanced economies, where central banks say that financial stability has increased in importance as a motivation for their CBDC involvement,” the authors wrote.

“Globally, more than two-thirds of central banks consider that they are likely to or might possibly issue a retail CBDC in either the short or medium term,” the report added. “Work on wholesale CBDC’s is increasingly driven by reasons related to cross-border payments efficiency.”

The BIS report noted that CBDCs can essentially cut out the middlemen in financial transactions which in turn can make such transactions run both faster and smoother and at a lower cost, allowing vendors to avoid paying the fees they typically need to pay on debit and credit card transactions.

“Central banks consider CBDCs as capable of alleviating key pain points such as the limited operating hours of current payment systems and the length of current transaction chains,” the authors wrote.

The BIS survey findings come shortly after the International Monetary Fund said in a February 2022 report (pdf) that nearly 100 nations are evaluating releasing their own CBDCs amid concerns that the surge in popularity of cryptocurrencies like bitcoin may undermine the growth of domestic currencies.

Unlike cryptocurrencies that are unregulated and decentralized, the value of a CBDC is pegged to a country’s currency, meaning the currencies would be issued in dollars, euros, etc., and are more stable and secure.

So far, countries including the Bahamas, Nigeria, and those in the Eastern Caribbean Union have already fully launched a digital currency. Meanwhile, India, Sweden, Saudi Arabia, and Russia are among those who have launched pilot CBDCs.

In April 2022, BIS said it had developed two prototypes for a shared platform that would allow for international settlements using digital currencies issued by multiple central banks.

In March 2022, President Joe Biden issued an executive order giving the “highest urgency on research and development efforts into the potential design and deployment options of a United States CBDC.”

But while advocates of CBDCs point to the benefits, such as lower costs and quicker transaction times, those opposing it fear CBDCs will increase government control over money.

Agustin Carstens, general manager of BIS, noted in 2021 that central banks would have “absolute control on the rules and regulations that will determine the use of that expression of central bank liability, and then will also have the technology to enforce that.”