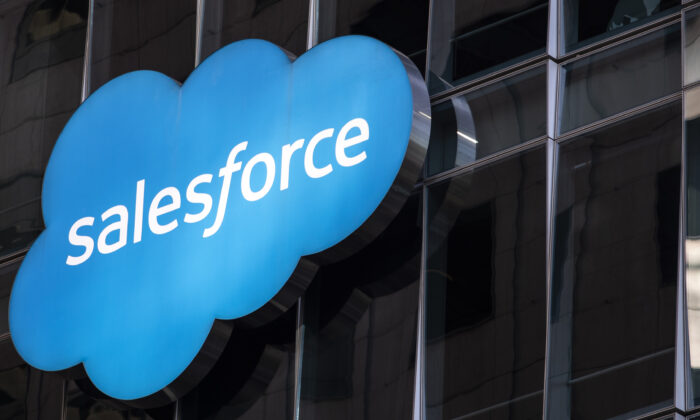 The Salesforce logo is seen at its headquarters in San Francisco, Calif., on Dec. 1, 2020. (Stephen Lam/Getty Images)
Companies

On Tuesday, Salesforce reported adjusted first-quarter EPS of 98 cents on $7.41 billion in revenue. Both numbers beat consensus analyst estimates of 94 cents and $7.38 billion, respectively. Revenue was up 24 percent from a year ago.

“This stickier installed base gives us higher confidence in the company’s ability to drive meaningful margin leverage in the near and long term,” Sills wrote.

“We keep our positive view on CRM shares and see room for a catch-up in performance given the established positioning/relative resilience of this platform, demonstrated progress towards continued margin improvement, and shares which are trading at 4.5x EV/S and 20x EV/FCF on our revised CY23 estimates,” Turrin wrote.

“The real stand out from the call was raising FY23 operating targets by 40 basis points, which we do not think was expected,” Bachman wrote.

“We reiterate that CRM remains very well-situated to help its vast customer base manage revenue and process optimization via digital transformation,” Moskowitz wrote.

“Last night Salesforce delivered a much better than feared April quarter and guidance which will be a major relief for tech investors showing that core enterprise demand is holding up well despite the macro and geopolitical swirls,” Ives wrote.

“While shares look inexpensive on an EV/sales basis (~4x our FY23 vs. the group at ~6x), we also note that the ~18.5x FY24 FCF should provide a more defined floor for investors in the current environment,” Peterson wrote.

“The company did lower FY23 revenue guidance by $300mm, though this is purely the result of FX headwinds as the company noted the current macro environment is not causing any material impact to demand,” Berg wrote.

“While the cRPO outlook of 15 percent (vs. 21 percent last quarter) suggests the growth profile is not immune to FX headwinds and a tightening business cycle, CRM has a proven track record of navigating challenging environments,” Bracelin wrote.