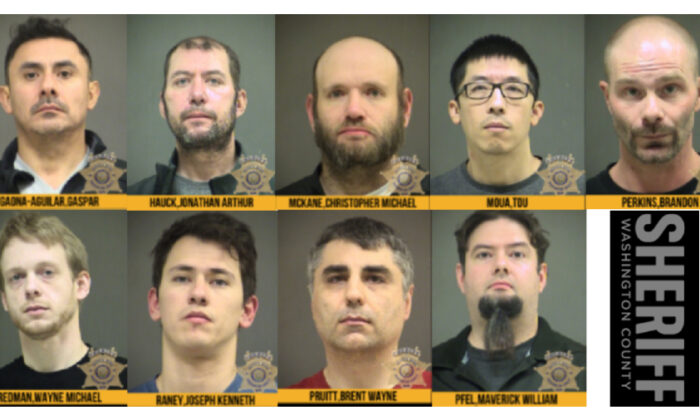 Nine men have been arrested in Washington following an undercover predator sting by Oregon authorities.

In a statement, the Washington County Sheriff’s Office said investigators had launched the operation on Oct. 17.

Officers posed as 15-year-old boys and girls on a number of social media platforms and dating sites, and were contacted by the predators who arranged to meet for sex.

The predators were arrested by undercover deputies at a location where they believed they would be meeting the child in person.

The statement said that nine different men were caught in the sting.

Gaona-Aguilar was also arrested for criminal driving while suspended and a probation violation related to his registered sex offender status, according to the statement.

All of the named men now face felony charges of luring a minor and first-degree online sexual corruption of a child.

They encouraged parents to help their children to remain safe online by staying aware of any websites and mobile applications their children are using.

The statement said that during the sting, multiple people immediately ended their conversations once they learned the person they were talking with was identifying as a child.

“Grooming increases the predator’s access to his victim and decreases the likelihood of discovery,” the report explains.

Meanwhile, the Children’s Assessment Center states that pedophiles look for certain characteristics in potential victims, which include children who are passive, quiet, troubled, and lonely.

It said: “Family structure is the most important risk factor in child sexual abuse. Children who live with two married biological parents are at low risk for abuse.

“The risk increases when children live with step-parents or a single parent. Children living without either parent (foster children) are 10 times more likely to be sexually abused than children that live with both biological parents.

The report added: “Children who live with a single parent that has a live-in partner are at the highest risk: They are 20 times more likely to be victims of child sexual abuse than children living with both biological parents.”