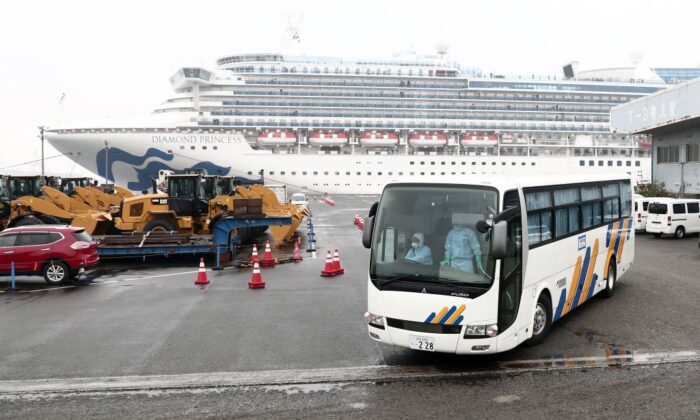 A bus with a driver (L) wearing protective gear departs from the dockside next to the Diamond Princess cruise ship, at the Daikoku Pier Cruise Terminal in Yokohama port in Japan on Feb. 16, 2020. (Behrouz Mehri/AFP via Getty Images)
CCP Virus

Eighty-eight more cases of the Novel Coronavirus have been confirmed on the cruise ship Diamond Princess, Japanese health authorities reported on Tuesday.

Japan’s Ministry of Health, Labor, and Welfare said that the 88 cases were confirmed after testing 681 people aboard the ship.

The ministry added that there are now 542 known cases on the ship, after testing a total of 2,404 passengers and crew.

The Tuesday announcement came one day after the ministry announced 99 new cases of coronavirus on the ship.

However, passengers who have tested negative for the virus can disembark the ship beginning on Wednesday, when the 14-day quarantine ends for the ship docked in Yokohama, Japan’s Health Minister Katsunobu Kato said on Tuesday.

Kato added that samples from all passengers had been collected as of Monday, and all test results will be available by Wednesday,

The disembarkment process will take about three days, according to Kato.

The Westerdam cruise ship, operated by Holland America, is now docked in Sihanoukville, a port city in Cambodia, after it was turned away by Thailand, the Philippines, Taiwan, and the U.S. territory Guam amid coronavirus fears.

The four Japanese were tested negative for the virus in Cambodia, but will be subject to further testing in Japan, Motegi said.

Meanwhile, a South Korean presidential plane landed at Haneda Airport on Tuesday to pick up four Koreans and a Japanese person who were aboard the Diamond Princess, according to South Korean outlet Yonhap News Agency.

The plane is expected to return to South Korea’s Gimpo International Airport, west of the country’s capital Seoul, on Wednesday morning.

Hongkongers on the Diamond Princess will soon be evacuated by two charter flights organized by the Hong Kong government. The city’s leader Carrie Lam said on Tuesday that one of the flights will arrive at Haneda Airport on Wednesday. There are about 352 Hongkongers on the cruise ship.

Lam added that Hongkongers evacuated from Japan will be subject to a 14-day quarantine after they return back to the city.

Five people from Macau on the Diamond Princess will also be evacuated by boarding the Hong Kong flights, local newspaper The Standard reported on Tuesday, citing the Macau government.