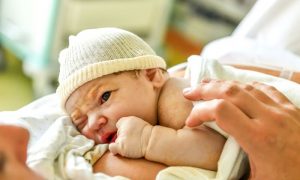 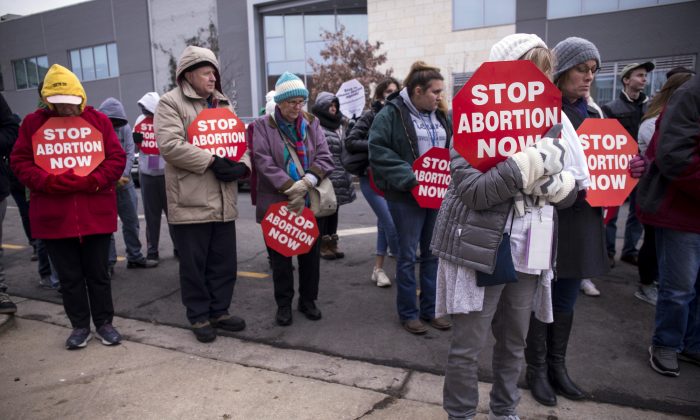 Demonstrators gather during a protest vigil on Jan. 17, 2019, in Washington. (Zach Gibson/Getty Images)
US

An 85-year-old man was praying outside a Planned Parenthood abortion center in San Francisco when he was assaulted by a man clad in black who also stole the victim’s banner.

In the clip, an alleged abortion activist knocks down the victim, identified as Ron, tells him to stay down, repeatedly kicks him, and tears away a “40 Days to Life” sign Ron was holding.

“I tried to keep him from taking it and that was it,” Ron told NBC. “Then he knocked me down and kicked me.”

The video begins with the abortion activist walking away with Ron’s banner as the 85-year-old pursues him and attempts to jam the bicycle’s wheel with the pole which held the sign.

“We were just here praying as we always do during the day,” Ron said.

The attacker can be heard saying “old man, stay on the ground” before tugging the sign from the victim’s hands. According to Ron, the same man harassed the group three times this week and tried to steal the sign.

Police are investigating the incident as an assault.

Ron said he bruised his back but returned to the same Planned Parenthood days later.

Life Legal Defense Foundation’s senior legal counsel, Allison Aranda, called the attack “intolerable” and vowed to make sure “justice is served and that the freedom to speak freely on the public sidewalk without threat of physical violence is protected no matter the message,” Fox News reported.

“Over the past few months, we have seen an increase in violence from abortion supporters in an effort to instill fear and deter our law-abiding volunteers,” Shawn Carney, the president of 40 Days for Life, told Fox News.

“The idea that San Francisco is tolerant is a joke,” Carney added.

Planned Parenthood, the nation largest abortion corporation, has surveillance footage of the incident but reportedly refused to provide it to police or assist in the investigation, according to the National Review.

Despite the attack, 40 Days for Life said there has not been a police presence at the Planned Parenthood location.

Another 40 Days for Life volunteer, Imelda Jacquez, filmed the video on her cellphone. San Francisco Police Public Information Officer Robert Rueca said the police have obtained Jacquez’s footage and are investigating the assault.

“An elderly man and a suspect got into an altercation where the suspect assaulted the elderly man and stole a sign that the victim was using for a planned protest,” Rueca told National Review.

Police are still “looking to identify the suspect and ultimately place them into custody,” Rueca added.

According to Life Legal, Ron is afraid for his safety.

“We have seen an increase in violent assaults during peaceful pro-life vigils at Planned Parenthood and other abortion facilities across the nation,” the organization said in a statement.