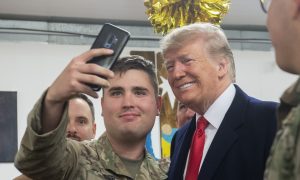 Videos of the Day: President Trump Meets With US Troops in Iraq on Christmas
0

An 82-year-old allegedly shot his son on Christmas during an argument, killing him.

Guy Vickery called 911 and told them he’d shot his son 50-year-old Benjamin Vickery in the upper body and the son was later pronounced dead at South Florida Baptist Hospital.

Investigators told WTSP that Guy Vickery was booked into the Hillsborough County Jail and charged with one count of manslaughter with a weapon.

It wasn’t clear what the argument was about.

The shooting happened around 9:30 p.m. on Tuesday, deputies said.

A witness told officers that Benjamin Vickery began arguing with his father and a witness, prompting Guy Vickery to go upstairs to his bedroom and grab a gun. Benjamin Vickery tried to flee but his father shot him. The witness said they heard a loud sound and then saw the son face down on the floor.

Neighbor Brent Register told the Tampa Bay Times that the men had a tumultuous relationship. They were both machinists who were highly sought after by mining companies.

Register did not know what the men were arguing about, but court records show that they had been involved in a shooting before.

In February 2000, Guy Vickery shot his son in the shoulder after his son kicked and punched him during an argument.

Benjamin Vickery was treated at South Florida Baptist Hospital and released, and charged with one count of false imprisonment, one count of battery and domestic violence, and one count of burglary of a vehicle. The charges were eventually dropped.

Guy Vickery’s shooting was in self-defense and he was not charged, deputies said then.

The figures were compiled from more than 13,000 law enforcement agencies around the United States that submitted their crime data to the FBI. Violent crime increased from 2015, the FBI said last year.