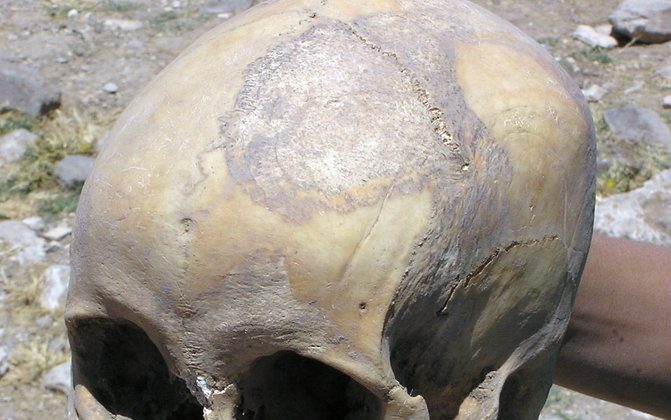 File photo of the excavation of a skull. (Shutterstock*)
archaeology

Archaeologists in Norway made an extremely rare discovery when they found an ancient skull believed to date back 8,000 years at a dig site in Stokke, southwest of Oslo. According to a news report in The Local, the skull was found to contain a grey, clay-like substance inside it, which is thought to be the preserved remains of the individual’s brain. If analyses confirm this to be the case, it will constitute one of the oldest brains ever found. Being able to study a preserved brain enables scientists to piece together the individual’s last hours and may also reveal any diseases or pathological conditions such as tumours and haemorrhaging.

It is extremely rare to find a preserved brain of this age because brain tissue is rich in enzymes which cause cells to break down rapidly after death. Under certain conditions, however, the process of decomposition can be slowed down. For example, brain tissue has been found in the preserved body of an Incan child sacrificed 500 years ago. Her body was found at the top of an Andean mountain where the body swiftly froze, preserving the brain. An older example comes from a 4,000-year-old brain in Turkey, which had been preserved following an earthquake which buried the individual, followed by a fire that consumed any oxygen in the rubble and boiled the brain in its own fluids.

The skull recovered in Norway was found within a Stone Age settlement in which archaeologists have also found numerous artifacts and a pit of carbon-rich soil containing bones. Among their findings are Norway’s oldest unburned bone and other biological material. Preliminary analysis of the skull dates it to 5,900 BC, although further testing is needed for confirmation. Although scientists believe it is a human skull belonging to a child, the fragmentary state of the remains means that it cannot yet be discounted that the skull came from an animal.

Speaking of the possible brain matter inside the skull, Gaute Reitan, dig site leader, told NRK, “Inside it is something rather grey and clay-like,” adding, “You can just think for yourself what that may be.”

“It’s seldom enough that we get to dig in a camp from a portion of the Stone Age that we really don’t know much about,” Reitan added. “But the fact that we’re uncovering a whole lot of things that are exceptional on a national basis, makes this very special.”

If testing reveals that it is indeed brain, the find could provide new insights into the living conditions during the Stone Age in Norway. The recovery of ancient brain specimens could also pave the way to the study of health in prehistoric times.

*Image of a skull via Shutterstock