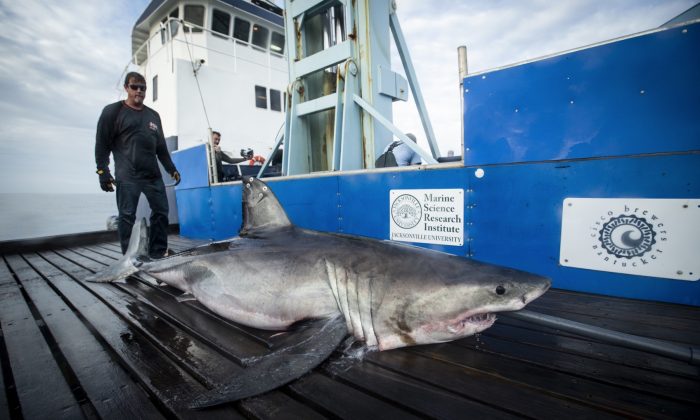 The 10-foot, 800-pound shark dubbed "Miss May" onboard a research vessel. (OCEARCH)
US News

Researchers tracking a 10-foot, 800-pound shark off the eastern coast of the United States have announced the massive creature has made its presence known just 15 miles off the coast of Cape Cod by way of a “ping.”

The shark—a great white dubbed Miss May—”pinged in” at 4:58 a.m. on July 9, according to an update on the OCEARCH website, an ocean research organization that tracks sharks.

A “ping” happens when a tagged shark’s dorsal fin breaks the surface of the water and transmits a signal, which is noted down for tracking purposes.

That news was met with a hint of trepidation by some commenters, with one saying: “How far off shore? We are in corolla !”

“Welcome to North Carolina!!💙 We are happy to have you!!😙 Have some Cheerwine or Sweet Tea while you are visiting:)” wrote another commenter.

In an interview with Reader’s Digest, Fischer stressed the importance of sharks to the world’s oceans, saying, “To put it simply, sharks are balance-keepers: if we lose our sharks, we lose our oceans.”

CBS News reported on July 9 that drone footage of the waters of Cape Cod Bay showed two sharks acting aggressively toward each other.

“They’re always biting each other, we can tell from the patterns of the bites that they’re aggressive toward each other,” said Dr. Greg Skomal, a Massachusetts shark researcher. “But we’ve never seen it before.”

According to the report, shark researchers spent several days looking for sharks in the waters off Cape Cod and found a whopping 20 of them.

Researchers believe the massive number of seals in the area may be attracting the sharks.

Commenter John Kawenga wrote: “If this was the 80 kilo tiger How big was the Predator that ate this huge beast, and it’s still out there, but we’ll done retrieving the head, should have put the head back as bait as the beast may have still been in the area 👍🤙🤙🤙”