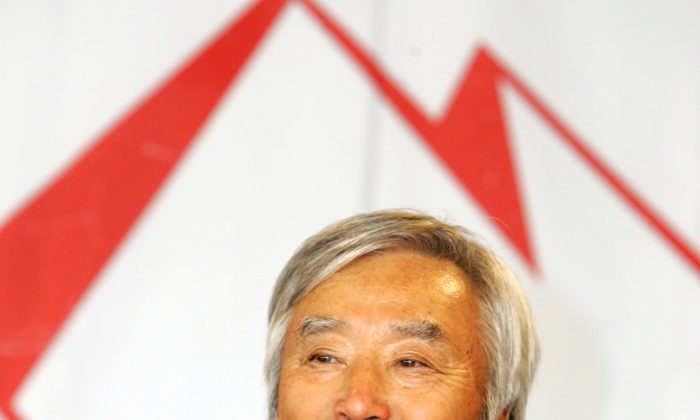 A file photo of Yuichiro Miura answering questions at a news conference in Tokyo on June 7, 2007. Miura is one of Japan's old men of the mountain, a small cluster of graying Japanese climbers who since 2002 have been passing among themselves an august title: the oldest person to have conquered the world's tallest peak. (AP Photo/Shizuo Kambayashi)
Asia & Pacific

Miura Yuichiro, 80, has had four heart surgeries and broke his pelvis and thigh in 2009—but that didn’t stop him from becoming the oldest person to reach the peak of Mount Everest Thursday morning.

“I never imagined I could make it to the top of Mount Everest at age 80,” he said in a satellite phone call to his family from the peak at about 9 a.m. local time on Thursday. “This is the world’s best feeling, although I’m totally exhausted. Even at 80, I can still do quite well.”

He broke the previous record set by Nepal’s Min Bahadur Sherchan, who reached the 29,029-foot-high peak at the age of 76 in 2008. Sherchan, now 81, plans to climb Everest next week; if he succeeds, he will take the record from Miura.

Adventure runs in his blood.

At the age of 99, his father skied down Mont Blanc in the Alps, according to Japan Today. Miura’s son accompanied him on his current climb, along with two other Japanese climbers and six Nepali sherpas.

Miura has suffered from arrhythmia, an irregular heartbeat; he underwent heart surgery in January for the fourth time since 2007. He also broke his pelvis and thigh in a skiing accident in 2009.

At about 4 a.m. local time, Miura’s team posted on Facebook that the weather was calm and Miura was in good condition.

“Adventures of no age limit!” wrote Kenichi Hamada. Marika Takahashi wrote that she had met Miura in New Zealand last year and was impressed with his “great energy.”

“Congratulations! I am impressed again,” she wrote.

Many others wished him a safe descent and return to Japan.

Sherchan, ahead of his ascent next week, has experienced some digestive problems recently. On Wednesday, however, he said by telephone from the base camp that he was feeling better and “ready to take up the challenge.”