Another Hospital Director Infected with Coronavirus, in Critical Condition
0 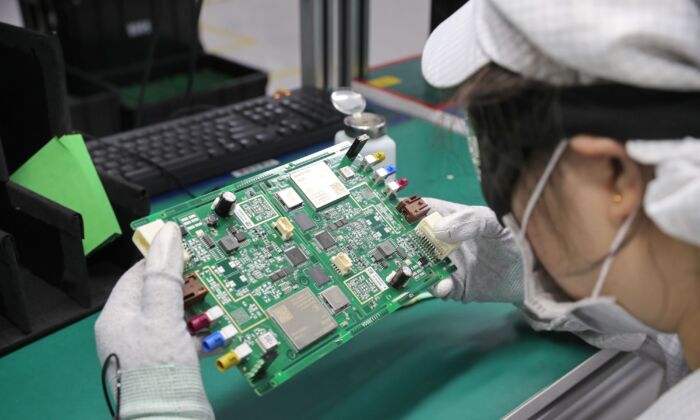 A Chinese employee works at a factory in Nantong in China's eastern Jiangsu province on Feb. 10, 2020. (STR/AFP via Getty Images)
CCP Virus

The Chinese regime recently announced that 80 percent of all central-government-run enterprises resumed operations on Feb. 18, following a mandated extended Lunar New Year break in order to prevent people from gathering and potentially spreading the coronavirus.

But benchmarks indicated that many more Chinese businesses did not return to work, despite the central authorities’ desire to prevent an economic slowdown due to the virus outbreak.

Rate of Returning to Work?

Similarly, as of Feb. 13, daily power coal consumption across China is approximately 50 percent lower in 2020 compared with 2016–2019 averages during the same time frame, according to research by investment bank Morgan Stanley.

Huachuang Securities released a report estimating that only two-thirds of all migrant workers can return to work by the end of February.

State-run media Xinhua, citing data from the Jiangsu provincial government, reported that 3.24 million workers in that region returned to work by Feb. 16—or 57 percent of the number during normal periods.

Furthermore, the report said those 3.24 million workers comprised 17 percent of the total number of workers who went back to work in China. Going by that number, that means only about 19 million workers returned to work in the whole of China.

According to China’s latest official statistics, China has 805.7 million workers as of the end of 2018. About 213.9 million of them work in manufacturing industries.

In the realm of state-owned firms, China’s State-owned Assets Supervision and Administration Commission (SASAC) organized a press conference on Feb. 18 to address the topic of businesses reopening. This is a government agency under the cabinet-like State Council that manages all 20,000 state-owned enterprises in the country.

Peng did not provide details such as how many production lines within these enterprises restarted, or how many workers returned to their positions.

But investment firm China International Capital Corporation told Chinese media Caixin that there has been “a significant decline” in the operating rate of: state-owned firms that produce coking coal (used to make steel); blast furnaces; manufacturers of semi-steel tires for cars; and cement producers.”

“Baiwangxin Industrial Park used to have 12,000 workers who worked inside. Now, only 2,500 workers are working. In several large-size factories, less than 200 staff are working in the workshops,” the report said. “Most of the businesses at Nanshan Kexing Science Park are asking their employees to work from home.” The latter is home to dozens of mobile game developers.

The report explained that most of the migrant workers don’t own property in Shenzhen, but landlords of apartment buildings they rented have refused to let them enter—because they were worried the workers might be infected with the virus.

A netizen shared on Chinese social media Pearvideo the situation at a Foxconn factory in Zhengzhou City, Henan province on Feb. 18.

With a return-to-work award of 3,000 yuan ($430), Foxconn still couldn’t have enough workers. “It has been four days [since Foxconn reopened]… Today we have more workers. We have over 200 workers… The two production lines need 1,050 workers… Veteran workers don’t want to come back,” the Foxconn security guard said in the video.

The netizen also filmed in front of the Foxconn dormitory for workers at the Zhengzhou factory, where a bulletin board notice stipulates that all workers must report their whereabouts for the past 30 days. Workers coming from other cities are required to be placed under quarantine for 14 days.

The U.S. Chamber of Commerce in Shanghai also recently published the results of a survey, in which it interviewed 104 of its member companies with manufacturing operations in Shanghai, Suzhou, Nanjing, and the wider Yangtze River Delta region.

78 percent of the companies did not have sufficient staff to run a full production line. The lack of staff, logistics issues, and not having sufficient facial masks were among the companies’ biggest concerns.