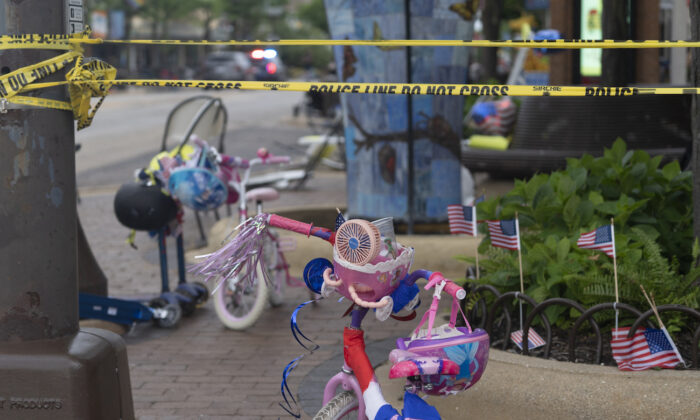 Police crime tape is seen around the area where children's bicycles and baby strollers stand near the scene of the Fourth of July parade shooting in Highland Park, Ill., on July 4, 2022. (Youngrae Kim/AFP via Getty Images)
US News

An 8-year-old boy who was shot in the chest while attending the Independence Day parade in Highland Park, Illinois, on Monday may never walk again.

Cooper Roberts had been attending the parade with both his parents: mother Keely Roberts, and father Jason Roberts along with his twin brother Luke when gunman Robert Crimo opened fire on the crowd.

He was shot in the chest and suffered a severed spinal cord, family spokesman Anthony Loizzi told reporters on Thursday. His twin brother and mother were also wounded in the attack.

The young boy was air-lifted from Highland Park to the University of Chicago Comer Children’s Hospital before undergoing several surgeries, including one on Wednesday night in which “doctors were able to close up his belly,” Loizzi said.

He is “currently sedated and on a ventilator [and in a] critical but stable condition,” the spokesperson added. Due to the severity of his spinal cord injury, doctors are unsure whether Cooper will ever walk again, Loizzi, who is a colleague of the mother, said.

Meanwhile, his twin brother Luke was hospitalized with shrapnel wounds in his lower body but was later released from the hospital after doctors removed the debris.

Keely Roberts, who is a superintendent of a Lake County elementary school district, was hit in the foot and leg and underwent several surgeries before asking to be released from the hospital so that she could be by Cooper’s side at the children’s hospital, Loizzi said.

“She told her doctors and nurses that they should either discharge her or she walked out on her own because she needed to be with their son,” Loizzi said.

Cooper, was normally a “very active” child and had a passion for baseball and other sports, Loizzi said, noting that the boy’s mother and sister have spoken about how “it will be a new normal for him going forward.”

“He’s fighting as hard as he can,” Loizzi said of Cooper, while his family, including his four adult sisters, are  “devastated but focusing their energy on Cooper,” the spokesperson said.

“It’s been a very emotional time for everyone in their circle,” he said.

Friends of the family have set up a GoFundMe page to help raise the funds needed to pay the Coopers’ medical bills and therapy, and it has so far raised $541,993.

The page states that Keely was “seriously injured, and has endured several surgeries” and will undergo “more surgery and possible long-term medical issues, but will mostly recover.”

“Cooper was shot and his spinal cord was severed,” the page continues. “After undergoing many surgeries, he is currently in critical condition, but stable. However, the doctors have determined that he will be paralyzed from the waist down.”

Seven people were killed and 30 more injured during Monday’s mass shooting, including husband and wife Kevin McCarthy, 37, and Irina McCarthy, 35, whose two-year-old child Aiden McCarthy has been left orphaned by the tragic incident.

The suspect, Robert Crimo, has been charged with seven counts of murder and officials said dozens more charges are being sought. If convicted, Crimo would face a mandatory life sentence with no possibility of parole.