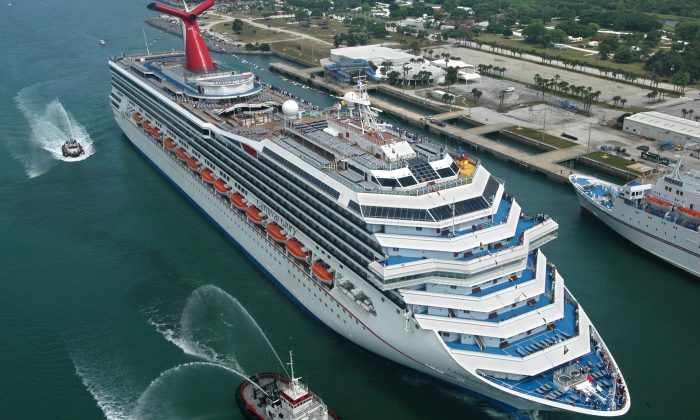 The Carnival Glory arrives in Cape Canaveral, Fla., on July 11, 2003. An 8-year-old girl died on Oct. 14, 2017, after falling to her death from a deck overlooking the ship's atrium. (Andy Newman/Carnival Cruise Lines/HO)
Crime and Incidents

A holiday at sea turned tragic for one family after an 8-year-old girl fell from an interior deck of a cruise ship’s atrium to a deck below and died.

Details of the incident have not yet been released, but a diagram of the Glory’s deck layouts show the Old Glory Atrium extends seven decks up from the Colors Lobby.

Photos of the atrium show it has a chest-height railing with glass panels.

The cruise ship itself carries nearly 3,000 guests and over 1,000 crew members. Besides a night club, lounge and restaurants, it includes a more kid-friendly Seuss At Sea fantasy world, where the cruise line company promises, “your favorite books (and characters!) come to life before your eyes.”

Yesterday, Oct. 14, at approximately 8.15 am while the cruise ship Carnival Glory was docked at PortMiami, a female child, approximately 8 years of age, fell from a deck in the ship’s interior atrium to a lower deck. The ship’s medical team responded immediately and the child was transported to the ship’s medical center. The ship’s command immediately contacted Miami Dade Police Department which was on site. She was subsequently transferred via ambulance to a local hospital where, tragically, she succumbed to her injuries. Our most heartfelt condolences are with the family at this very difficult time.

Capt. Ignatius Carroll, the public relations officer with the Miami Fire-Rescue Department told reporters on Saturday that when Miami-Fire Rescue arrived, they found members of their county counterparts, Miami-Dade Fire Rescue, were performing CPR on the 8-year-old child.

“I’m not sure what happened, how exactly the child fell, but we understand that the child may have fallen about 20 or so feet from a landing,” Carrol told reporters.

After providing emergency care, first responders took the little girl to nearby Ryder Trauma Center. Carrol reporters the girl was in “extremely critical condition,” when she was transported.

Due to weekend hours, Miami-Dade Fire Rescue were unable to respond to questions by press time.

Carrol told reporters that homicide detectives are investigating the incident.

“I know that there’s a lot of questions that you are asking as far as how this happened, where the child was, where all this took place, but a lot of those questions will be answered when police conduct their investigation.”

Calls to the Miami-Dade Police Department were not answered by publication time. The department has issued no press releases or social media reports about the incident.

The Glory was christened on July 14, 2003, at Port Canaveral, in Florida. It was made in Monfalcone, Italy, at a cost of $500 million, and was the largest ship sailing weekly Caribbean cruises from Central Florida.