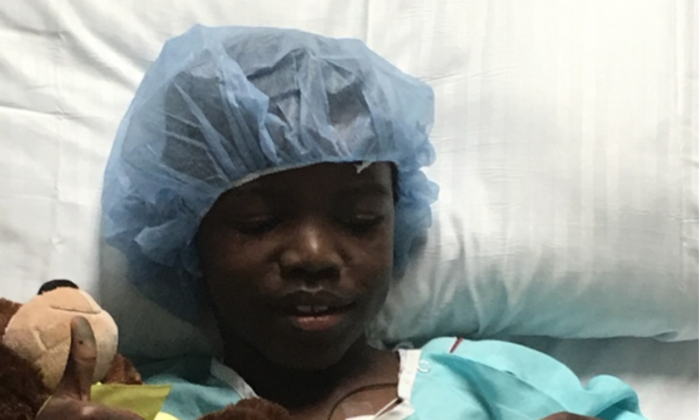 An 8-year-old boy is gaining national media attention after he was featured last Thursday on the Today Show.

Cameron Scott was diagnosed with a rare brain tumor known as medulloblastoma. It then spread to his spine, in what is known as a high-risk stage four cancer, according to Today.

In an extraordinary turn of events, Cameron is now cancer-free. He was treated at the St. Jude Children’s Research Hospital in Memphis, which pioneers new research and treatments for children suffering from cancer and other life-threatening diseases.

When Cameron’s MRI revealed the cancer, his father had to prepare for what was coming.

“I’m dad, and I have to be strong for everybody,” Wendell told Today about his reaction to the news. “I just felt we’re gonna fight.”

Cameron underwent a four-hour surgery to remove the tumors before moving to St. Jude for further follow-up treatments. The boy went through six months of chemotherapy and radiation treatment.

“I feel amazing now,” Cameron told Today. “I feel like I’ve been through everything.”

"Cameron Scott, 8, loves superheroes like Batman who use their brain and strong will in the place of superhuman powers. He has emulated his favorite cartoon character in the last year by showing his own toughness and strength after being diagnosed with a rare form of brain cancer. Cameron is now remarkably cancer-free after being treated at St. Jude Children’s Research Hospital. He and his family enjoyed a day in the Florida sunshine at the Legoland Florida Resort in Winter Haven this week following an emotional and grueling year." via: @moorinformation

According to Today, the hospital used pioneer gene sequencing which enabled them to prescribe a specific and highly-targeted treatment. It was then that they discovered it was not just a single disease but four different kinds.

The whole course of treatment was covered financially by St. Jude. According to NBC affiliate WSMV, no St. Jude patients ever receive a bill for their treatment.

The boy and his family remain grateful for the hospital’s work. This week the family were able to enjoy a day at Florida’s Legoland Florida Resort in Winter Haven after an emotional and exhausting year.

In a Tweet that went viral, one person wrote how donations are always worth it.

I've donated to St. Jude since I was old enough to receive an allowance. My brother had leukemia and St. Jude is why the costs didn't burden my family. Though he lost his battle, these stories are proof of why those donations are ALWAYS worth it. https://t.co/lz8NHecEpj

“I stay humble and thankful,” an emotional Wendell told the network. “Today (at Legoland) means a lot. I think (Cameron) said, ‘It makes me feel like everybody loves me, I’m special.’

It’s only fitting that Cameron loves heroes like Batman who use their brain and strong perseverance instead of superhuman powers.

The family started a GoFundMe page last year to help with expenses.