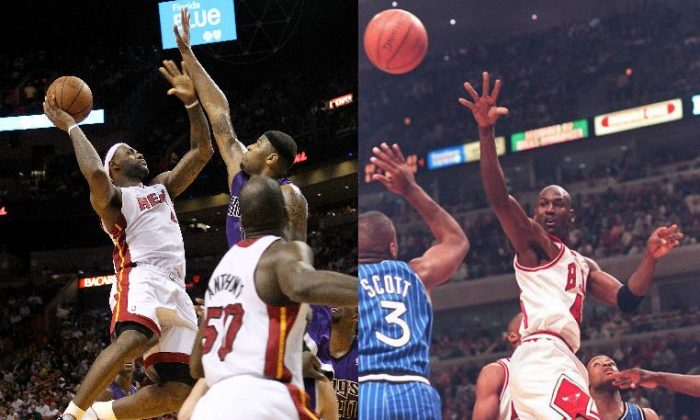 Left: LeBron James #6 of the Miami Heat shoots over DeMarcus Cousins #15 of the Sacramento Kings during a game at American Airlines Arena in Miami, Fla., on Feb. 22, 2011. (Mike Ehrmann/Getty Images) Right: Basketball star Michael Jordan (C) of the Chicago Bulls (C) dishes off a pass in the second quarter over the head of Orlando Magic guard Dennis Scott at the United Center in Chicago March 24, 1995. (Vincent LaForet/AFP/Getty Images)
Good to Know

As LeBron James racks up MVP awards and championships and plays out the prime of his career, arguing weather he is better than Michael Jordan is a fan’s delight. That the question is ultimately unanswerable doesn’t really matter, because the discussion is so much fun!

Here are 8 reasons James is better than Jordan.

Michael Jordan used his speed and athleticism to shut down opposing perimeter players and generate turnovers. But James is just as athletic and he is capable of dominating almost any opposing player from point guards to power forwards. He is even capable of playing against some centers on defense.

To illustrate the difference between Jordan and James, let’s imagine the 2013 Heat playing against the Bulls in Jordan’s heyday.

The Heat might use 3 or 4 different players to defend Jordan in order to save James’s energy. But you can bet James would defend Jordan the best and guard him during the crucial phases of the game.

The Bulls would not have Jordan guarding James because of James’s ability to overpower him close the basket.

Since James can play point guard on offense and center on defense, his coach can exploit any number of mismatches, rest anyone he wants, and dictate the personnel the other team has to have on the floor.

This versatility is hard to understate, and it is the real reason James should have been the defensive player of the year for several years.

3. Destroying the Point of Attack

James may be at his best against opposing point guards, whom he seems to swallow up with his ridiculous size and speed.

Point guard is often the hardest position for anyone to guard because of the way most teams throw screen after screen at the opposing defender. James often just cuts off the screener and the ball handler at once, as he did to Tony Parker in the 2013 finals and 2011 MVP Derrick Rose in the conference finals, effectively grinding these teams’ entire offense to a halt.

Sending an opposing player to the free throw line is the easiest way to give the other team easy points, as most players shoot their highest percentage from there. Michael Jordan committed a foul an average of once every 14.7 minutes he was on the court. James commits a foul once every 21.1 minutes he is on the court, giving the opposing team fewer easy opportunities.

5. James Is a Better Three-Point Shooter

James’s three-point field goal percentage is only 1 percent higher than Jordan’s, but James takes an average of three times as many shots from behind the arc than Jordan did.

James’s three-point percentage has gone up for the last three consecutive years, reaching over 40 percent last year. That is considered an elite level that forces other teams to send a player out at James and opens up opportunities closer to the basket for his team-mates.

6. James Is a Better Passer

James has averaged 6.9 assists per game for his career, while Jordan averaged 5.3 assists per game. The fact that James is probably a better passer, and certainly a more willing passer; also highlights how James is better able to involve his teammates in the game and move the ball around to find the best shot.

This also demonstrates that…

7. James Is a better Teammate

Jordan was said to use intimidation to instill fear in his teammates to try and get the best out of them.

James is known to use encouragement and shows his trust in his teammates by passing them the ball throughout the game in order to instill confidence in them.

In a revealing interview with ESPN sports analyst Chris Brussard this past off-season, James said, “I love seeing the success of my teammates more than anything.” He said he wants his team to feel like a family.

Who would you rather work with?

8. James Is a Better Rebounder

Jordan averaged 6.2 rebounds per game in his career, while Lebron is averaging 7.3 so far. With James’s superior size, it’s easy to see why he is a better rebounder.

The people who see James as a better player often think of him as a bigger and stronger version of Jordan.

I think it is more complicated than that. Jordan was a superior mid-range player and scorer, whose inexhaustible drive to win made him better and better when the stakes were high.

James is a more versatile player and has a more devastating physical presence. However, he has been more susceptible to feeling pressure and failing to come through in big moments. I can’t wait to see what else he is able to accomplish. Whether you think Jordan is better or James is better, joining the debate is equally fun. It is too bad we cannot see them play against each other and we can only imagine it.

Michael Courter
Follow
Michael Courter has a master’s degree in Social Work with distinction from California State University Chico and is certified in Parent Child Interaction Therapy. He has been treating individuals and families since 2006.