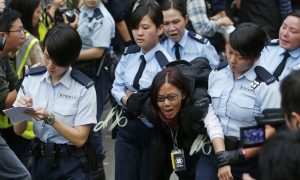 Forgive me for being a passionate freedom-lover all my life,
Even though I fear falling hard some day.
Abandon the ideal — anyone can do that,
But I’d fear the day when there’s only you and I left.

Protesters were roused by Beijing’s Aug. 31 decision to not introduce political reform to Hong Kong as outlined in the Basic Law, the semiautonomous city’s mini-constitution.

However, Leung Chun-ying, Hong Kong’s hugely unpopular top leader, had other ideas. The occupation were seen in strictly legal terms from the get go, as evinced by countless government statements and press conferences.

The Hong Kong police, who previously enjoy a special relationship as faithful protectors of Hongkongers, earned the ire of the public when they fired 87 tear gas canisters into peaceful crowds in a bid to drive off the “illegal” protesters.

International media dubbed the protests the “Umbrella Movement” after photos of demonstrators using umbrellas as shields circulated on the Internet.

As the occupation wore on, the police increasingly alienated Hong Kong citizens as they got comfortable with using pepper sprays, riot shields, and batons to batter protesters “armed” with umbrellas, plastic helmets, paper shields, and foam padding. Before the last protest site was cleared, a local university poll early December revealed that the People’s Liberation Army garrison in Hong Kong was more popular than the police.

Chief Executive Leung also made no friends for his handling of the protests. Seen as very pro-Beijing, cold, and callous — Leung told Western media that democracy was not for the poor because they would upset the nomination process and the Chinese regime — Hong Kong’s head honcho saw his popularity ratings hit a “depressing” 39.7 percent at the end of the protests.

Meanwhile, the Umbrella Movement occupation started strong, but lost support near the end. Although tens of thousands of Hongkongers participated in rallies at the start of the protests, a December survey revealed that almost 50 percent of 500 people polled were against the occupation.

Ultimately, the occupation would prove instructive to the youthful protesters.

Student leaders from prominent groups Hong Kong Federation of Students and Scholarism learned the hard way that there’s only so long the sense of outrage against injustice can fan the flames of protest. After failing to force protesters off the streets when public support was strong in October, the Hong Kong government stalled for time, and only moved in again when people cooled to the protests a month later.

After losing the Mong Kok site, the student leaders were ready to escalate the protests again to force concessions from the government. Lacking mass support, they were handily dealt with by the authorities at a major road artery. The Admiralty and Causeway Bay sites were shortly demolished without resistance.

Still, Hong Kong’s pro-democracy protesters haven’t given up on the Umbrella Movement. Student leaders tell Hongkongers to take non-cooperative actions next to get the government’s attention. They will also closely follow developments in the government’s second round of consultations on political reform, and restart protests if the government proves unfaithful to the people.

Indeed, as the lyrics of the popular protest song “Boundless Sea and Sky” by local band Beyond suggests, the Umbrella protesters won’t abandon the fight for the ideal — genuine democracy in Hong Kong — because their rights and freedoms, which is being encroached upon by the Chinese communist regime and the Hong Kong government, depend on them holding firm.