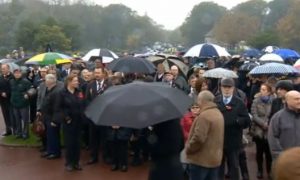 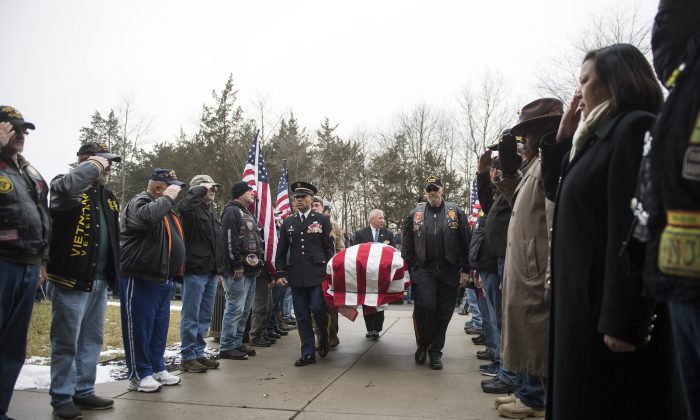 Pall bearers carry the casket of Vietnam veteran Peter Turnpu as hundreds of strangers gather for a funeral in Wrightstown, New Jersey on Jan. 18, 2019. (Joe Lamberti/Camden Courier-Post via AP)
US News

Hundreds of strangers came together on Friday, Jan. 18, for the funeral of a U.S. Army veteran who died alone at his New Jersey home last month.

Peter Turnpu, 77, died on Dec. 9 from natural causes. He had no known relative and few friends. So a police officer asked LeRoy Wooster, owner of LeRoy Wooster Funeral Home in Atco, to help put together a service for Turnpu.

“It was the right thing to do,” Wooster said. “I didn’t want him to be buried alone.”

More than 1,000 paid their respects at the funeral in North Hanover Township, around 42 miles east of Philadelphia, on the afternoon of Jan. 18. An honor guard from Joint Base McGuire-Dix-Lakehurst was also present.

A procession of around 200 vehicles made its way from a church to the funeral to pay respect to Turnpu. Mourners lined up and saluted as pallbearers carried the flag-draped casket, some weeping and others giving a salute.

The veterans among the mourners, some leaning on canes and many decorated with medals and holding flags, saluted as the casket passed, the Inquirer reported.

Wooster obtained information about Turnpu after finding a letter from the Department of Veterans Affairs during a visit to a VA hospital in Philadelphia.

He told the Inquirer that Turnpu was born in Estonia on July 3, 1941, and came to the United States with his mother after his father died. He served in Vietnam from 1964 to 1966 and received an honorable discharge.

Hundreds of people, veterans groups and beyond are here at the Veterans Memorial Cemetery In Wrightstown to honor, thank, pay tribute & say goodbye to fallen Vietnam Veteran Peter Turnpu.NBC10 Philadelphia

It took weeks of searching for Wooster to find the information and learn that Turnpu was eligible for burial with full military honors at the Brigadier General William C. Doyle Veterans Memorial Cemetery.

Wooster donated a casket, transportation, and services as a funeral director. The state provides a free burial plot to veterans and their spouses.

“I really did not want the publicity and I am not a hero. The hero is Peter. The heroes are the veterans who are here to honor him,” Wooster told WPVI-TV.

“We’re all brothers. Nobody should go out alone,” said Ordway VanHee, the vice president of the Vietnam Veterans of America New Jersey Chapter 899 in Wrightstown, when attending the service.

Rev. Rochelle Coles is among the veterans who came to show respect for Peter Turnpu, a veteran who died with no known family pic.twitter.com/dFP7A55Ytr

Connie O’Hara, who said she knew Turnpu in the early 1950s, described him as “a blonde little boy my age” and “an avid stamp collector” while posting condolence on the funeral home’s webpage.

“I only read about this story online so I didn’t know this individual. Immigrated to America. Served our nation. A true American Patriot. Thank you for your service. RIP,” he said.