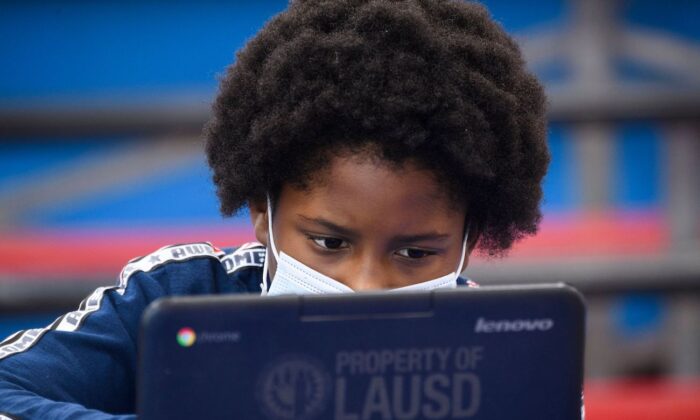 A child wears a face mask while attending an online class at a learning hub inside the Crenshaw Family YMCA during the Covid-19 pandemic in Los Angeles, Calif., on Feb. 17, 2021. (Patrick T. Fallon/AFP via Getty Images)
Southern California

More than half of students across all grade levels tested in the Los Angeles Unified School District (LAUSD) failed to meet state testing standards in subjects like mathematics and English for the 2021–22 school year.

The district’s preliminary results show that only about 42 percent of students met English standards, while only 28 percent met those for mathematics, according to data released by the district Sept. 9. The California Department of Education’s “Smarter Balanced Assessments” test students in grades 3–8 and 11.

District officials said in a statement that the results were expected due to school lockdowns during the COVID-19 pandemic, which they said has “erased two decades of progress in math and reading.”

“As anticipated, the preliminary state assessment results illustrate that there is no substitute for in-person instruction,” Superintendent Alberto Carvalho said.

The scores are also lower than three years ago across all grade levels tested, except for eighth-grade English, which increased by about half a percentage point to about 42 percent. The 2018–19 school year was the last time the tests were conducted before being interrupted by the pandemic.

Students meeting English standards decreased from 44 percent three years ago to about 41.7 percent.

As for math, only about 28 percent of students meet the standards compared with the previous 33.5 percent.

Students in 11th grade suffered the biggest drop in the most recent math and reading test results, which fell by seven percentage points and about 10 points respectively.

Math scores decreased in every grade level tested, with both eighth and sixth graders seeing a nearly six-point drop.

Carvalho said the district is “proactively addressing the decline in achievement performance.”

“We are working collaboratively to accelerate and realize the learning potential of every student, bolstering important support systems including instructional, mental health and community supports to meet the needs of our students,” he said.

The district also plans to boost academic results through “targeted support,” such as additional school days for students falling behind and more training for teachers at high-needs schools—or those with more students that are socio-economically disadvantaged—according to the LAUSD’s statement.

However, the United Teachers of LA—the union representing LAUSD teachers—said last month they would boycott the district’s first of four optional additional school days, which its members said were added to this school year without labor negotiation.

The district’s school board approved in April adding four days to help students catch up on learning. The board also added three optional days—Aug. 9, 10, and 11—for teachers’“professional development.”