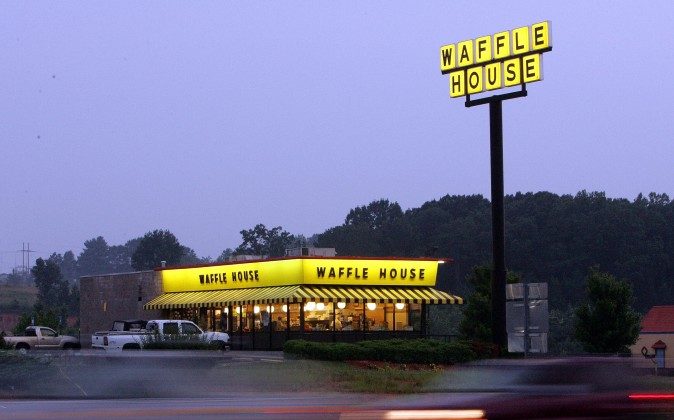 Phillip Brooks, a 70-year-old Army veteran, was walking to his regular seat in a Fayetteville, N.C., Waffle House when a would-be robber rushed in, waving what appeared to be an AK-47.

“He ran up to the cash register, started demanding the money—’Give me all the money in the drawer. Open the drawer,'” Brooks told WRAL.com.

All the working parts were missing, so I just told the girls, ‘Don’t give him anything. That’s a fake gun.’
— Phillip Brooks, Vietnam veteran

As other customers moved to safety, some dialing 911, Brooks immediately sprang into action and pointed out that the assault rife was fake.

“All the working parts were missing, so I just told the girls, ‘Don’t give him anything. That’s a fake gun,'” he said.

The robber said back to Brooks, “Well, I’m for real.”

Brooks answered with a swift cane hit to the nose, commencing a physical fight between the two. Customers began to jump in and aid the veteran, but the attempted robber made it out of the store and has yet to be apprehended.

Brooks, who suffered minor bruising, gave credit to military training and says that he spent his first three years in the infantry.

The would-be robber is described as a thin black man with a light complexion, dreadlocks, and is roughly 5 feet 10 inches. He was last seen wearing a black and grey hooded sweatshirt, with a red sweatshirt underneath, grey pants, and a yellow bandana over his mouth.