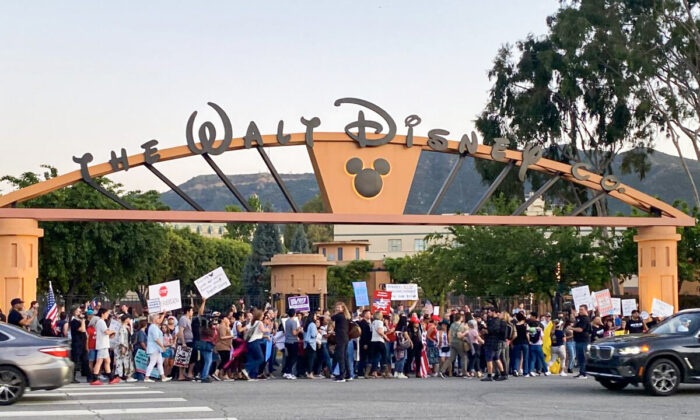 About 150 people attend a rally to oppose The Walt Disney Company's stance against a recently passed Florida law that prohibits schools from teaching their youngest students about sexual orientation and gender identity, outside of Disney's headquarters in Burbank, Calif., on April 6, 2022. (Jill McLaughlin/The Epoch Times)
Business & Economy

On Wednesday, Disney reported fiscal second-quarter adjusted EPS of $1.08 on revenue of $19.25 billion. Both numbers missed consensus analyst estimates of $1.19 and $20.1 billion, respectively. Revenue was up 23 percent from a year ago.

Disney said revenue was reduced by about $1 billion due to the termination of a licensing contract with an unnamed customer.

Revenue in Disney’s parks, experiences and products segment more than doubled to $6.7 billion, but the company also said COVID-19 lockdowns and restrictions in Asia could reduce third-quarter operating income by $350 million.

BMO Capital Markets analyst Daniel Salmon said Disney’s quarter was mixed, but there were no big surprises for investors.

“There was a little more emphasis on profitability in DTC, but Disney+ is still launching in new countries and is less mature than NFLX, thus we still see a growth mode largely intact,” Salmon wrote.

RBC Capital Markets analyst Kutgun Maral said Disney has impressive momentum in its direct-to-consumer and parks businesses, but investors are likely concerned about the long-term attractiveness of the streaming video model.

“We believe execution against Disney+ net adds in 2HFY22 will be critical in reinvigorating the bull thesis for not just Disney but the rest of our media coverage where investor sentiment has remained challenged since Netflix’s results,” Maral wrote.

“Economic uncertainty remains an overhang at Parks and there is work to be done on streaming, but F2Q results highlight Disney’s growth potential,” Swinburne wrote.

“Parks still haven’t gotten the 20 percent of high-spending visitation back that comes from abroad, or the cruise ships,” Crockett wrote.

Needham analyst Laura Martin said Disney is well-positioned to monetize its digital and physical assets in the long term while it continues to navigate near-term headwinds.

“Consensus estimates for DIS are too high owing to high near-term investment in DTC in 2022, and another year of unclear earnings contributions from linear TV and film releases as vaccines roll out slowly globally,” Martin wrote.

Wells Fargo analyst Steven Cahall said he didn’t expect much from Disney in the first quarter, and its report likely didn’t resolve the major debates surrounding the stock.

Bank of America analyst Jessica Reif Ehrlich said investors are likely concerned about a potential slowdown in Disney+ subscriber growth in the second half of the year.

BMO Capital Markets has a Market Perform rating and a $135 target.

RBC Capital Markets has an Outperform rating and a $176 target.

Wells Fargo has an Overweight rating and a $153 target.

Morgan Stanley has an Overweight rating and a $170 target.

Rosenblatt Securities has a Buy rating and a $174 target.

Needham has a Hold rating.

Bank of America has a Buy rating and a $140 target.