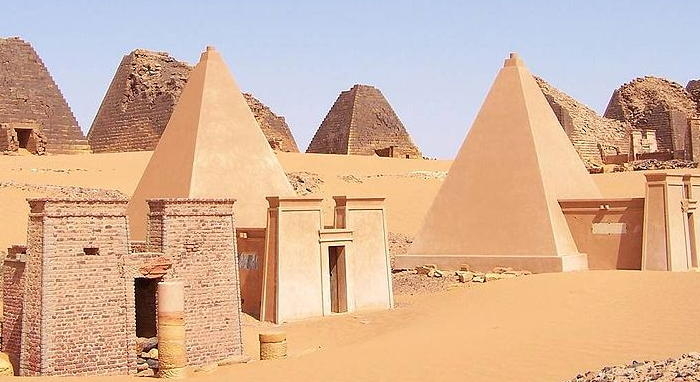 7 Pyramids Outside of Egypt (+Photos)

The Nubian pyramids were built during the Meroitic period, about 100 B.C. to 150 A.D. At the time, queens ruled independent of kings, and the pyramid chapels contain reliefs of many scenes in which a queen conquers her enemies.

The pyramids were styled after the Egyptian pyramids in an attempt to regain the glory of Egypt’s past, according to a Michael C. Carlos Museum article.

2. The Pyramid of Gaius Cestius

The Pyramid of Gaius Cestius in Rome, Italy, near the Porta San Paolo, was constructed before 12 B.C. by the praetor and priest Cestius. It stands about 120 feet (36.8 meters) high. The Roman Empire of the time was seized by “Egyptomania,” according to a University of Virginia article.

The pyramid dates from the early Helladic period, making it some 5,000 years old, according to Academy of Athens researchers.

The story behind it involves fratricide. It is said to be a memorial for the battle between the brothers Proetus and Akrissios, the grandsons of Danaos, the king of Argos. They fought to the death for succession to the throne.

In 2011, University of Athens researchers wrote: “[We] propose that the pyramids of Argolis and in particular the pyramid of Hellinikon village were very likely, besides being a burial monument or guard house, might be served also for astronomical observations.”

This royal tomb was built in 220 B.C. in Algeria. It’s name is the plural of Madres, known as one of the two ancestors of the Berbers.

The ancient Pyramids of Güímar are located on Tenerife, one of Spain’s Canary Islands. The six stepped pyramids align with the sun during the summer and winter solstices.

In Northwest Mexico, the La Quemada pyramid was built sometime between 600 and 900 A.D. This structures is thought to be left by the Chalchihuites civilization. It is part of a monumental core in the region, thought to be inhabited by the civilization’s elite, according to an About.com article by Nicoletta Maestri, a doctoral candidate in Mesoamerican archaeology at the University of California.