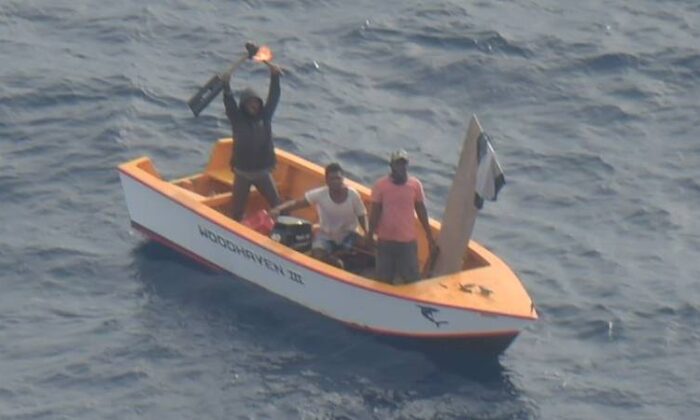 Three men found on board the Woodhaven III near Makin Island, Kiribati, on May 23, 2022. (New Zealand Defence Force)
Asia & Pacific

Seven people on two separate missing boats in the Pacific have been found and rescued by the Royal New Zealand Air Force (RNZAF).

The crew on an Air Force P-3K2 Orion plane had spotted both vessels within 10 nautical miles of each other near the Pacific Island nation Kiribati. The two boats had gone missing in separate incidents.

At the same time, the United States Coast Guard had been preparing to search for another boat with three people onboard, Woodhaven III, that had also been reported missing near Kiribati around the same time.

The Orion crew searched around Makin Island and coincidently spotted Woodhaven III first, which was located approximately 150 nautical miles from where it was thought to have gone missing.

Soon after, the yellow hulled vessel was also found with two men, a woman, and an 11-year-old child on board.

The crew reported that all seven survivors appeared to be in good health, dropped survival packs containing water and locator beacons to both boats, and contacted nearby vessels to conduct a rescue.

Air Commodore Shaun Sexton said it was a great result to be able to locate the survivors on both boats.

In a post on Facebook before the missing people were found, the Kiribati government thanked the New Zealand government for responding to their request for assistance.

“The Government of Kiribati remains grateful for the Government of New Zealand and the New Zealand’s Defense Force ongoing assistance to mount SAR (search and rescue) missions in search of missing fishermen and seafarers from Kiribati,” the post said.

Kiribati is an independent Pacific nation that is about halfway between Hawaii and Australia, with a population of around 120,000 people.