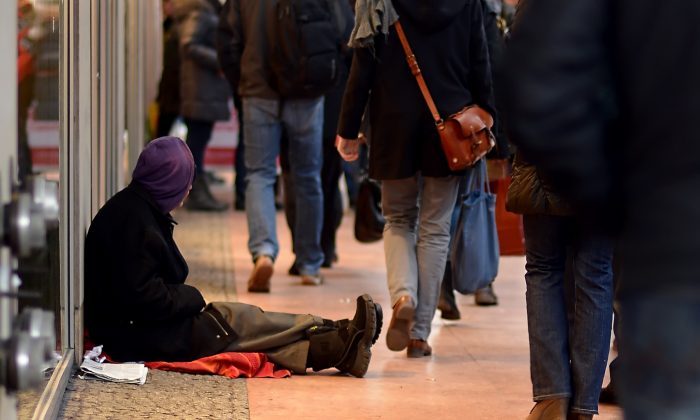 A man begging for money sits on the pavement in Berlin, on Dec. 20, 2012. Some Romanians are being lured to Germany on false promises to beg on the streets for “employers.” (Britta Pedersen/AFP/Getty Images)
12- OBSOLETE

A Romanian family in Hamburg has made a business out of luring compatriots to Germany and promising them jobs and better lives. Instead, they are coerced under highly dubious circumstances into becoming beggars for the “employer”. … (Read more)

British jeweller Graff has unveiled what it described as the “most valuable watch ever created” — a timepiece replete with more than 110 carats of diamonds costing $55 million. … (Read more)

As I compose these words from the Ramo Verde military prison outside Caracas, I am struck by how much Venezuelans have suffered. … (Read more)

…A Haitian lawmaker, Arnel Belizaire, accompanied by a group of heavily armed individuals, on Tuesday stormed the building of the Port-au-Prince prosecutor’s office and left with 11 suspects who were involved in a violent incident at the government-run retirement insurance agency… (Read more)

The Ayer Keroh Fire and Rescue station rescued a seven-year-old boy whose right leg was stuck knee-deep in a squatting toilet in his home in Taman Tasik Utama on Sunday. … (Read more)

North West premier Thandi Modise has appealed to men to do annual screening and testing for breast cancer.

“Though male breast cancer is rare, men can develop the disease and should be aware that they should seek care if they develop a breast lump,” Modise has said, according to a statement from her office on Sunday. … (Read more)

Meet Simon Seisa, the charismatic cartoonist-cum-actor whose pencil has earned him friends and turned some into instant foes.

But of late, Seisa has been attracting a lot of attention as Wasetso on Botswana television’s (Btv) Monday drama, Mareledi. In one of the scenes Wasetso, a traditionalist who refuses to let his modernisation erode him, finds himself squeezed in a tight spot while trying to keep the peace in his family. … (Read more)