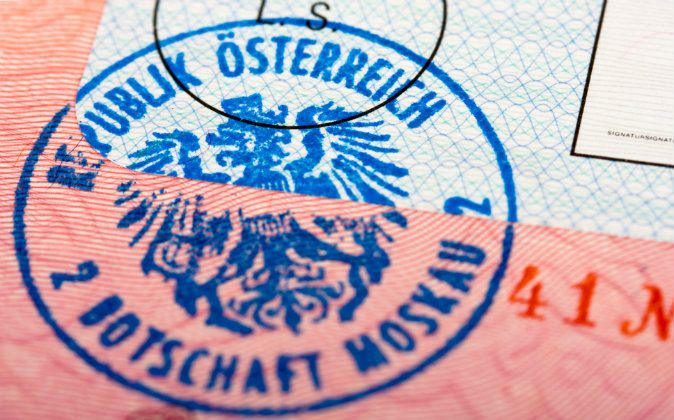 An Austrian passport stamp. A man who drove a Swiss car across the Austrian border got slapped with a hefty fine for violating a little-known law. (Shutterstock*)
12- OBSOLETE

A German pensioner was fined €15,000 for driving a Swiss car across the border into Austria, breaking a little-known EU law. An Austrian court has now ruled he cannot get his money back. … (Read more)

Burma: Burmese Food Truck to Deliver Street Eats With a Side of Tolerance

A new food truck may soon be driving the streets of Rangoon, delivering a mix of traditional Burmese cuisine along with a message about tolerance.

Fund-raising is under way to launch Harmoneat, a food truck that will serve healthy locally sourced dishes derived from the country’s diverse ethnic and geographic areas … the goal is to build positive associations between communities and celebrate diversity. … (Read more)

Beautiful women and men in expensive suits poured into the Chief Albert Luthuli Durban International Convention Centre for the MTV Africa Music Awards on Saturday night. The crowd cheered when host, US comedian Marlon Wayans, arrived on stage in a bead-studded rickshaw … and giggled when he battled to pronounce “KwaZulu-Natal” in his opening speech. … (Read more)

The 12-year-old Waukesha girl who was reportedly stabbed on May 31 by two classmates who wanted to please ‘Slender Man’, a fictional horror character, by killing her has been released from the hospital, her parents have confirmed. The girl was stabbed 19 times and left in the woods after a sleepover. When her parents asked how she managed to crawl to the sidewalk, she replied: “I wanted to live,” they said. …

Coffee growers in Panama, faced with their own production problems, now hear that the future price of coffee 21% fell to $169 from $215, the maximum price reached in April. … (Read more)

In India, it seems like there is no dearth in the number of political leaders and other public speakers who have made it their sole purpose to comment in a dastardly fashion about rape. … (Read more)

In the latest “Congestion Index” by TomTom, Istanbul was second on the list of cities with the worst traffic congestion.

According to the data in the index, which has been released since 2007, Moscow hit the top of the list with a traffic congestion rate of 74 percent followed by Istanbul with 62 percent, ranked among more than 160 cities in five continents. … (Read more)

*Image of an Austrian passport stamp via Shutterstock