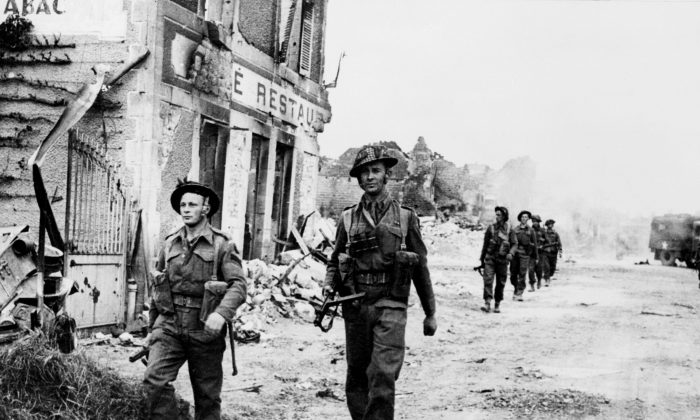 Allied soldiers cross 08 June 1944 the village of Douet, after the town of Bayeux fell, two days after the allied troops landed on Normandy beaches (north-west of France), to come as reinforcements during the historic D-Day, 06 June 1944, during WWII. (STF/AFP/Getty Images)
International

Italy: Singing nun to return to prayer after winning The Voice

A young singing nun, Sister Cristina Scuccia, has vowed to return to her life of prayer, school-teaching and preaching after winning Italy’s version of the popular TV talent show The Voice. The 25-year-old nun thanked God after prevailing in the final of the show on State broadcaster Rai, which ended early on Friday. … (Read more)

Nigeria: How my life was radicalised

Mujaheed Dokubo-Asari, leader of the Niger Delta Volunteer Force, on Sunday, June 1, 2014, celebrated his 50th birthday in Abuja. The next day, he spoke to newsmen on a number of issues, including his upbringing, his schooling, his radicalisation, and his struggles …

I got into the university at the age of 21 in 1985 — the University of Calabar. And from that age, death became my constant companion at every turn. …

We were demonstrating outside the main campus when the police started shooting. There was a female student, Nnenna, behind me. She was shot. She fell. I started wondering. I was taller than her; how come she got shot standing behind me? How did the bullet pass me to hit her? … (Read more)

D-Day holds a mythic significance for members of the Allied nations who took part in the largest sea-borne invasion ever mounted, on June 6, 1944. This year, on the 70th anniversary, thousands flocked to Normandy to commemorate the event. But how do Germans feel about that day? … (Read more)

Nana Kwaku Bonsam [a famous Ghanaian sorcerer] has reportedly claimed responsibility for Cristiano Ronaldo’s knee injury that is threatening the striker’s participation at the World Cup with his national team, Portugal. … (Read more)

Russia: Debate rages in Siberia over what age is OK to leave your kids home alone

The Investigative Committee in the Sakha Republic – Siberia’s largest region – is urging it to be made illegal for children to be left alone below seven.
‘We want some legislative moves on this issue. The reason is the very sad statistics about victims of fires in our republic, notably recent examples when children tragically died,’ explained Nadezhda Dvoretskaya, of the republic’s Investigative Committee – equivalent of the FBI – in an interview with Echo Moscow radio. … (Read more)

When Gideon Hoebeb (84) and Constantia Katiti Tsuses (80) tied the knot 60 years ago, they never imagined their eldest son, Erongo police chief, Commissioner Samuel Hoebeb, would walk his mother down the aisle for a vow renewal ceremony. … (Read more)

A Spanish zoo worker who dressed up in a gorilla costume as part of a drill was rushed to hospital after one of the vets mistook him for a real ape and shot him with a tranquilizer rifle. … (Read more)