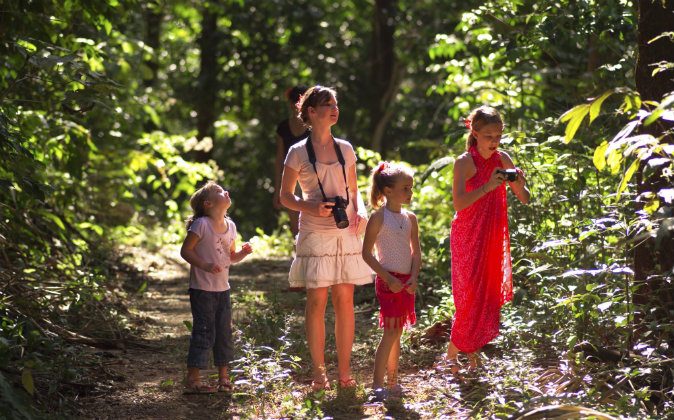 Tourists in Costa Rica. Locals revealed to the Tico Times what they really think of tourists. (Thinkstock)
12- OBSOLETE

Olalla Oliveros, a famous Spanish model and actress, has revealed that she secretly quit showbusiness in 2010 after experiencing an ‘internal earthquake’ during a visit to a religious sanctuary in Portugal and has spent the last 4 years as a nun. … (Read more)

Russia: Scientists to study exact age of ‘oldest wooden statue in the world’

Twice as old as the Egyptian Pyramids, samples of the Shigir Idol are sent to Germany for testing. This ancient example of human creativity was recovered in January 1890 near Kirovgrad but there remains uncertainty over its age, believed to be around 9,500 years old. Made of 159 year old larch, it is covered with Mesolithic era symbols, which are not yet decoded. Some 2.8 metres in height, it appears to have seven faces. … (Read more)

Costa Rica: What do Ticos really think about foreigners in Costa Rica?

… Responses to the survey – titled “Construction of Public Opinion Toward Immigration in Costa Rica” – included phrases with some pretty harsh language directed at U.S. citizens, such as: “They think the world revolves around them”; “they treat us as inferiors”; “they think they’re superior to us”; and “they have inflated egos.”

A football tournament of a different kind took place last weekend in Germany. At the national street football competition, teams of homeless people vied for the championship title. The tournament was also a chance for the German trainer to scout for talent for the Homeless World Cup being held in Chile in October.  … (Read more)

President Jacob Zuma was put up for sale in a tongue-in-cheek advert on classifieds website Gumtree, The Star reported on Monday.
The advert was posted by “Average Joe” on Thursday but disappeared soon afterwards, the publication reported. It featured Zuma’s picture, with the price set as “negotiable”. “Desperately in need of a functioning president. This one costs too much to maintain, will take what we can get at the moment, just make an offer,” read the message accompanying the picture. … (Read more)

The three secrets to longevity are work, diet and exercise – in that order, one of the world’s fittest pensionsers said in Dublin today.
Dr Charles Eugster, who turns 95 next month, said he believed retirement should be abolished.

“The most important thing for anyone is work regardless of how old you are,” he said. “Work is the fundamental thing for longevity” … (Read more)

Jang Jin-sung, former propaganda writer in North, now a witness to the truth

A poet laureate, a state propagandist, a state historian ― writer Jang Jin-sung, whose memoir “Dear Leader” about his life in North Korea was published in English in the U.K. in May, was all this before he escaped North Korea in 2004 at the age of 34. … (Read more)