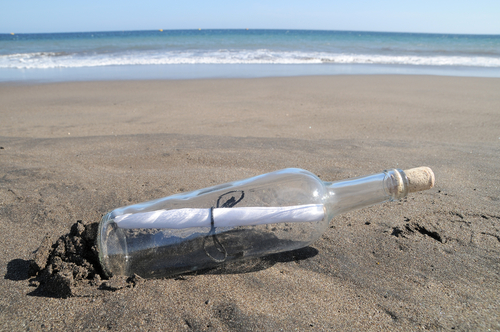 13-year-old boy in Chiloé discovers a message in a bottle tossed to sea two years previously and contacts sender on the other side of the world.

One December day Abraham Carimoney, 13, was walking to school on the remote Chilean island of Laitec, when he spotted a brandy bottle in the sand. Inside, he found a message from an Australian boat captain named Matt Jensen, who is probably the world’s biggest message-in-a-bottle enthusiast.

“I am interested in the ocean — in ocean currents,” read the letter. “I would like to hear from the person who finds this message. I’m offering a small reward.” …

Sony Corp. is developing a “smart wig” that can provide directions, enhance business presentations and even shoot a laser from the user’s forehead.

The electronics giant said the hairpiece uses wireless technology linked to personal computers and smartphones where data, such as destinations or presentation materials, are stored.

To offer directions to a wearer, vibration motors in the smart wig pulsate after receiving data from global positioning system technology. …

Romania’s traditions during the winter holidays vary from region to region, and some have mixed with imported, Western European traditions. But the traveler will still find there’s a lot to learn and discover during the month of December in Romania when it comes to traditions. …

Many Romanians plant wheat in a small pot, and see it grow until New Year’s Eve. In some regions of the country, people take small branches of fruit trees, place them in water and leave them in a warm room, only to see them blossoming towards the end of the year. Both the green wheat grass and the blossoming branches say something about the person’s future in the new year. If the wheat grass is healthy, green and tall, the new year will be rich for the person who planted it. …

Rolling Stone Keith Richards’ last artwork was discovered in NZ. The owner thinks he ‘stuffed it up’ by signing it.

A never-before-seen painting by Rolling Stones rocker Keith Richards has been stashed in a drawer in a swanky Auckland bed and breakfast for the past seven years. …

Older people in San Basilio de Palenque know 64 edible plants native to the region. Their grandchildren, about half. How can the agriculture past of this region not become history?

Domingo Rocha, a farmer in San Basilio de Palenque, in the Bolivar region of northern Colombia, is singing the nostalgia brought on by the ever-decreasing importance of his lifelong profession. …

Palenque is an important town in that history. It was founded in the 16th century by escaped slaves, and is considered the first free town in the Americas. The residents of Palenque were able to live relatively isolated — and thus free — from outside influences for centuries, and most residents today are of African heritage. …

Newport City Council said the decision to take her into care was made purely on her weight but couldn’t say how she had been allowed to grow so obese without intervention. …

Workshop: Twenty-five parliamentarians are learning to focus on enhancing their research and analysis skills to make evidence-based decisions.

Organised by the Royal University of Bhutan’s Institute for GNH Studies (iGNHaS), participants are also taught skills to enhance critical thinking, innovation and informed decision-making. “They would also learn skills on how to strengthen research and analyse public policy,” the press release from iGNHaS stated. …

*Image of a message in a bottle via Shutterstock