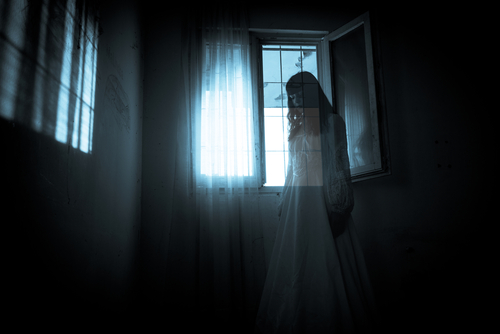 Spooked out by Halloween tales? Here are are few to leave you with thoughts of friendly ghosts.

1. When I was running youth exchange programs, one of my host families had twin daughters, about 5-years-old at the time. One of the girls could see people’s auras and also ‘fairies’ that lived in the plants in and around the house. Mom totally believed, but dad didn’t. One morning when dad was alone, he said to the plant in the kitchen: ‘Hey, if you’re real, at dinner tonight, tell my daughter to tell me the word “green.”’ That night at dinner, his daughter was looking on the plant as usual, then came over to her dad and said: ‘Daddy the fairy wanted me to tell you “green.”’ He became an instant believer.

2. My 3-year-old nephew was at my cottage. He’s asked me numerous times about the ‘girl over there’ while pointing at one of the back bedrooms. The place is small, and there is definitely nobody there, so I just dismissed it as a really active imagination.

Then some friends [were] visiting and they have a daughter around the same age. She [had] never met my nephew. Twice in the one day she asked about the ‘pretty girl’ while pointing at the exact same room. Definitely caught me out, and I didn’t know what to think.

Then at Christmas my family was over at my place and my nephew [pointed] at a picture of my wife and [asked] if she is coming to visit us here or does she just stay at the cottage.

My wife died ten years ago. Personally, I don’t really believe in paranormal stuff, so it’s probably just my logical brain putting together a bunch of kids’ ramblings, but it definitely got my attention.

3. My father tells me this story of my childhood every once in a while:

When I was around six years old, my dad’s best friend committed suicide. We’ll call him ‘Joe’ for the sake of the story. Obviously, it was a very rough and emotional time for my dad. …

Joe’s sister apparently had been blaming Joe’s wife for her brother’s suicide. …

A few days after Joe committed suicide, his widow called up my father sobbing about how she thought it was her fault. After about an hour of trying to console her, he told her: ‘If there was a way for me to talk to Joe now, I guarantee you that he would tell you that he loved you, and that it wasn’t your fault that he ended his life.’ Crying, she still didn’t believe him, but she thanked him for the kind words and let my father go.

My dad was obviously distraught after that long, hysteric conversation. …

As he walks by my room, he notices a whimper. He turns around, and enters my room, where he finds me weeping.

My dad enters my room and says “Matty, whats up? Why are you crying?”

It’s then that I stop crying for a moment, look up at him with teary eyes and say “Rick, it’s not her fault. I love her. It’s not her fault.”
With that, I stopped crying, rolled over back onto my bed, and fell swiftly back to sleep.

RELATED: 10 Amazing Things Kids Have Said About Past Lives

4. My wife was getting my 2-year-old son up one morning. He was standing in his crib. As she said good morning and walked over to him he picked up her shirt a little and crooked his head to the side.

She asked him what he was doing and he said, ‘looking for my baby sister in your tummy.’

She laughed it off as a weird kid imagination thing. We found out later that at the time she was two weeks pregnant and it was, in fact, a girl.

We had never really had the talk about where babies come from nor did we talk about having another child at all around him. So spooky.

5. My then 2-year-old daughter used to scream in the night, and told my wife and I it was because she was visited by a lady. A few weeks later, she stopped screaming. Off handedly, I asked if the lady had stopped coming. She answered: ‘No, she’s just nice now. Her name is Shelia. She sleeps in my bed sometimes.’

A year later, my youngest daughter turned 2 and started having the same screaming fits. Talking to her, she described the same lady named Shelia.

Skip forward three years. We’d never talked with our kids about it, figuring there had to be some active imaginations and sibling story telling involved. Hadn’t come up in at least two years.

We moved with our three kids, including a 2.5-year-old son. First night in the new house, he asked, “Where will Shelia sleep now?”

6. My Boss had two daughters one of which died very young in life due to a medical condition, she passed away in her early twenties. Anyways the family found it easier to not keep picture up of her or really discuss her as their way of mourning.

Anyways the other sister had five children, and on a quite frequent basis one of her little girls at a very young age would say she was playing with her imaginary friend Lisa, which is also the name of the deceased sister.

Not too much was paid attention to that fact until one day she also added that her friend was her Aunt, and she visited her quite frequently. The little girl had never been exposed to the fact that she had a Aunt and she had passed away before she was born, nor had she been told her name.

I am close to the family and when I heard that story it freaked me out.

7. My son was about 4-and-a-half and his sister was 18 months. I said I was really sorry I wouldn’t be able to read them a story that night as I had a meeting to go to, but I would read two the following night to make up.

I felt the hairs go up on the back of my neck. I thought he must have that wrong, so said, ‘Who?’ He answered: ‘Auntie Tracy, Mama. She looks just like you. After we go to bed she reads and sings to us.’

I had never told them that I was an identical twin and my sister was stillborn. Her name was Tracy.

8. ‘Aren’t you gonna say “hi” to Uncle Chris?’ [said] my 3 year old when I was watching her jumping on the trampoline.

Uncle Chris drowned in the lake nine years before she was even born, and nobody in our family talks about it, ever. I asked her where he was and she pointed to the garage and said ‘He tells me to be careful.’

Here are a couple that are more premonition stories than ghost stories:

9. My son (3 at the time) threw a huge tantrum when we were trying to leave the house because he ‘didn’t want to crash and die.’ After about 10 minutes, he just stopped and was ready to go.

As we were walking out of the house there was a very bad accident on the street in front of our house—right where we would have been driving if he hadn’t thrown his fit.

10. I was working with an autistic child who used to speak of himself in the third person. I was bathing him and he began to excitedly say, ‘His mom is coming, his mom is coming.’

I figured she told him the night before so I got his things ready and then we waited for his mom to come to pick him up. When she came I told her he was excited that she was coming, to which she replied, ‘I didn’t tell him I was coming.’

She said once they had been driving and her son had told her to be careful of the deer while talking to him on the phone. She sort of brushed it off, but slowed down. A few minutes later, a deer ran across the road, where she probably would have hit it had she not slowed down.