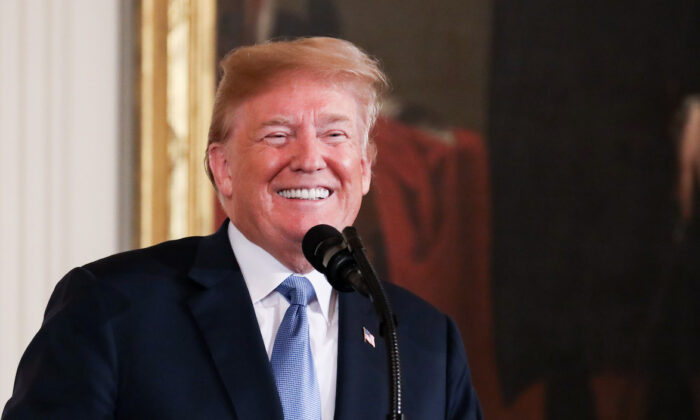 President Donald Trump in the East Room of the White House in Washington on June 26, 2018. (Samira Bouaou/The Epoch Times)
Economy

A SPAC announced plans to take Donald Trump’s new social media platform and media platform public. At the time of the announcement, the presentation did not offer up financial or user projections.

New details have emerged Monday with an 8-K filing.

One of the mysteries of the SPAC deal announced between Digital World Acquisition Corp (DWAC) and Trump Media & Technology Group was the investors and details of the PIPE. It was announced over the weekend that $1 billion is being invested in the deal as part of the PIPE. Preferred stock is being offered to PIPE investors at an initial conversion price per share of $33.60.

The conversion price represents a discount to the current DWAC price, which could be adjusted.

“If the VWAP of the combined entity for the 10 trading days after the closing of the business combination is at or above $56, no downward adjustment will occur. If the closing VWAP is below $56, then the conversion price shall be adjusted to the greater of a 40 percent discount to the closing VWAP and the floor price of $10,” the press release reads.

Also included in the 8-K was news that a request for information came from FINRA regarding the deal announcement. Additionally, DWAC received an information for documents from the SEC. The SEC probe is specifically looking for documents about board of directors meetings, policies and procedures for trading, telephone numbers, email addresses and investor identities.

TMTG confirmed that it is using Rumble Cloud for application servers and database servers. Rumble, which is going public with CF Acquisition Corp VI (CFVI), operates a similar media brand aimed at non-censorship.

An initial presentation from DWAC and TMTG centered on taking on large technology companies in social media and media, specifically ones that had censored Trump in the past. The new presentation released Monday leaned heavily on comparing the company to Twitter Inc (TWTR) and Netflix (NFLX) with the respective Truth Social and TMTG+ offerings.

Truth Social is seeking to provide an open, free and honest global platform “without discriminating against political ideology.”

TMTG+ will offer on-demand streaming and wants to offer “non-work entertainment” for consumers.

For the first time, the Trump SPAC deal is announcing details on its subscriber potentials. The company is forecasting to hit 81 million users by 2026 for Truth Social. The yet to be released app is forecasted to have 16 million users in 2022. Projections for Truth Social users are based on a Politico poll of registered voters, according to the presentation.

For TMTG+, the company sees subscribers hitting 40 million by 2026, which is less than 20 percent of current Netflix subscribers.

“TMTG+ could deliver a price point closer to that of Netflix given President Trump’s highly enthused base.”

Given the forecasts for the main TMTG units, the company has forecasted its revenue for each year 2022 through 2026, broken down as follows: