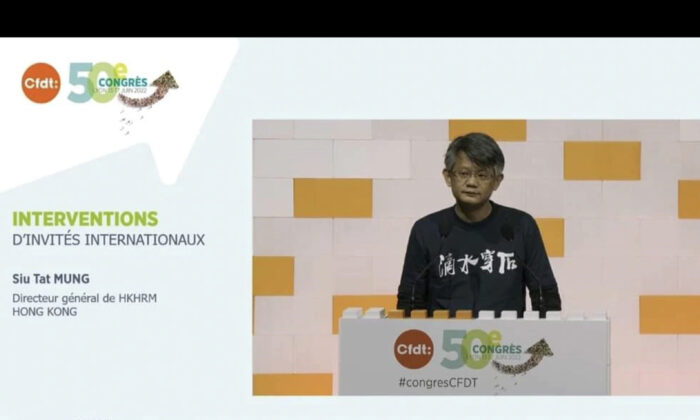 Around 62 unions dissolved under the national security law, at least one union has been banned, while 11 union organizers have been arrested or prosecuted. (Screenshot of Mung Siu-tat Facebook)
HK Current Affairs

Two years after the implementation of the national security law in Hong Kong, civic society life is becoming more dire by the day. A report was recently released by the Hong Kong Labour Rights Monitor, founded by Mung Siu-tat, former executive secretary of the now dissolved, Hong Kong Confederation of Trade Unions, confirming that many Unions  in Hong Kong have been forced to disband.

The report shows, that at least 62 unions and civic organisations, including media groups and political parties, have been forced to dissolve since the national security law was enacted in June 2020: At least one union has been banned, while 11 union organizers have been arrested or prosecuted.

It is expected that this is only the tip of the iceberg, as the Hong Kong government is expected to side more with businesses, stripping away more workers’ rights and making it harder for union rights to survive. However, there might be a silver lining for the workers to continue to fight and struggle for labor rights in a new way.

The report analyzes, that during the process of dissolution of two of the largest trade unions, namely, the Hong Kong Association of Educational Professionals and the Hong Kong Federation of Trade Unions, the Chinese Communist Party (CCP) used three primary steps to clamp down on the independent trade union movement. First, they would use their state media, or government mouthpieces to smear the unions, then they would work with the local authorities and claim that the targeted union could be violating the national security law. Lastly, the CCP would send “a middle man” from Beijing, to act as a negotiator to force the unions to disband.

The report carries on to describe how the outdated colonial laws and practices, have suddenly been applied to union members in the present day.  An outdated, law such as sedition, had been used many times by the authorities, to arrest and prosecute members of the Hong Kong Federation of Speech Therapists. Some elements in the publications were said to be incriminating,and as the government sees it, mocking the current Hong Kong political situation is an offense under new the national security law. A law established in the colonial era, is now ironically being twisted around by the CCP.

Under the current political and legal risks, Hong Kong trade unions are facing their three biggest challenges, including loss of talents, activity limitation, and fund shortage. Especially after the dissolution of the workers’ union, many affiliated associations have lost their offices, and support for organizational officers, resulting in more difficulties in recruiting new members. Some had no choice but to cease operations.

The reports highlights bigger individual effects of the situation: The remaining organizers are under a tremendous amount of psychological stress. The former president of the Trade Union, Wong Lai-yuen, revealed that he suffers from post-traumatic stress disorder (PTSD). The impacts on Wong’s health include detrimental symptoms of insomnia, anxiety, unhealthy binge eating, and self-blame and shame.

Mung Siu-tat, who is currently in the UK, told Voice of America that, even though Lau Siu-kai, vice president of the Chinese Association of Hong Kong and Macau, openly declared, that Beijing would consider all be forgiven if small organizations no longer commit acts that are seen to be against China, or causing disruption to Hong Kong.

However, Mung has his hesitations, “Anyone can be arrested for anything right now in the name of ‘national security’ in Hong Kong. How much capacity and scope do workers still have to fight for what’s fair?”

Perhaps the only way we could tell is if someone continues to follow the striking format which Foodpanda (online ordering platform) ethnic workers used, by striking as a team, not as a union.