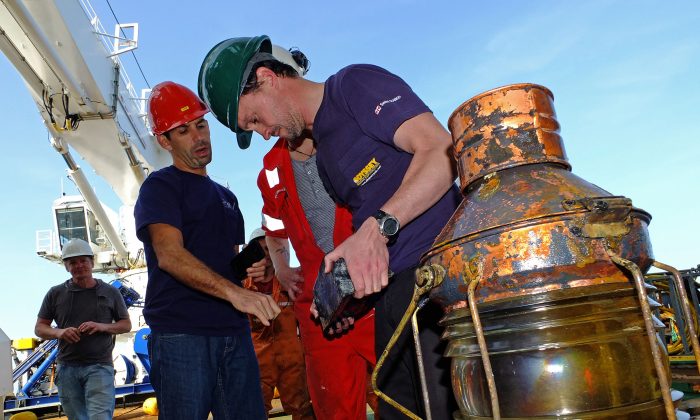 A salvage team recovers 61 tons of silver from a 1941 shipwreck in the Atlantic ocean. (Odyssey Marine Exploration, Inc., www.odysseymarine.com)
UK

61 Tons of Silver Record Shipwreck Haul: Costly Hunt Worth It?

61 tons of silver: Odyssey Marine Exploration set a record for the most valuable shipwreck recovery with 61 tons of silver worth more than $36 million at silver prices as of July 24. Odyssey announced its find on Tuesday, noting that it will retain 80 percent of the value of the cargo with the remaining 20 percent going to the U.K. Department for Transport.

Odyssey recovered the silver from the SS Gairsoppa, a 412-foot steel-hulled British cargo ship that sank in February 1941, having won the contract to do so from the U.K. government.

“This was an extremely complex recovery which was complicated by the sheer size and structure of the SS Gairsoppa as well as its depth nearly three miles below the surface of the North Atlantic,” said Greg Stemm, Odyssey’s chief executive officer, in a press release. “To add to the complications, the … silver was stored in a small compartment that was very difficult to access.”

Some profitable finds have been made by ship excavators in the past—including three high-profile finds early 2012 of gold, platinum, and silver worth a combined $4.5 billion, according to Popular Mechanics magazine—but treasure hunts are expensive.

James Delgado, director of the Maritime Heritage Program at the National Oceanic and Atmospheric Administration (NOAA), explains the expenses involved.

“An average mission in deep water can run into the millions, and that’s just to find it. For every dollar you spend looking and finding, you’ll spend about $10 excavating and treating what you’ve found [to offset] chemical changes that happen underwater,” he told Popular Mechanics last year.

“The street value of shipwrecks is minimal. Generally it’s a losing proposition, except in a few cases, because it costs more to find them, work them, and deal with what you find,” Delgado said.

Popular Mechanics tried to discover how much treasure may lie on the ocean floor. Delgado estimated millions of shipwrecks are sprinkled over the vast swaths of ocean covering the Earth, containing goods of varying worth. Shipwreck hunter Sean Fisher of Mel Fisher’s Treasures told Popular Mechanics, he thinks there’s about $60 billion in sunken treasure.

“For about 300 years, the Spaniards came over here and stole all of the wealth of the Americas,” Fisher said. “They would lose about 10 percent of that as the cost of doing business. Several wrecks out there by themselves are worth several billion dollars.”