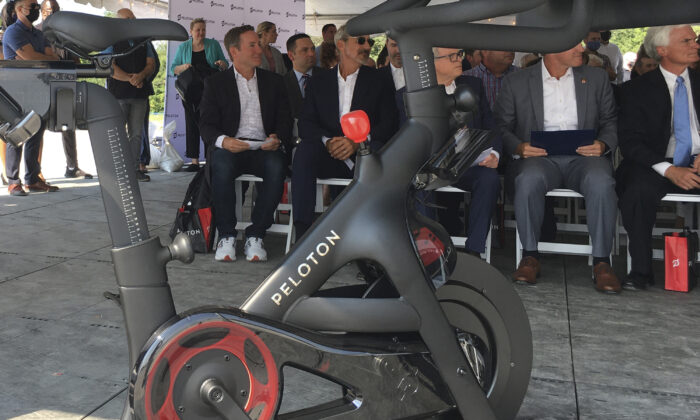 Peloton CEO John Foley (L) is seen behind one of his company's fitness machine along with others gathered for the groundbreaking for the company's first U.S. factory in Luckey, Ohio, on Aug. 9, 2021. (John Seewer/AP Photo)
Markets

6 Peloton Analysts Break Down Q1 Earnings: ‘Not the Year We Envisioned’

Peloton reported a fiscal first-quarter earnings per share (EPS) loss of $1.25 on revenue of $805.2 million. Both numbers fell short of consensus analyst estimates of a $1.07 per-share loss and $810.7 million, respectively. Revenue was up 6 percent from a year ago.

Looking ahead, Peloton guided for first-quarter revenue of between $1.1 billion and $1.2 billion, well short of analyst estimates of $1.5 billion. Peloton also cut its full fiscal year revenue guidance from $5.4 billion to between $4.4 billion and $5.4 billion.

“We were wrong about PTON’s ability to execute amidst reopening and competitive headwinds,” Kulkarni wrote.

“We believe the stock is likely to remain range-bound until signs of increasing demand return, which is likely to be a couple quarters at least,” Kessler wrote.

“However, near-term sales visibility is clouded by slowing traffic online, a mix shift to the lower priced Bike, and slower adoption of Tread,” Telsey wrote.

Bank of America analyst Justin Post said the new guidance is “not the year we envisioned,” but the post-earning selloff seems overly bearish.

“While estimate cuts are a negative, we still expect 1.1mn sub adds in FY22 (+47 percent y/y) despite reopening impact, and there is potential upside from new products,” Post wrote.

“It’s hard to pound the table at exactly this moment given the volatility, but LT growth algo (low churn underpins strong sub. NPV) and our enthusiasm remain intact,” Yruma wrote.

Needham analyst Bernie McTernan said upside for Peloton will hinge on its growth trajectory in fiscal 2023 and beyond.

“Our forecast assumes a rebound in FY’23 as PTON is still in the early part of its adoption curve, we believe, and adding incremental customer funnels, although given the current outlook there is a high degree of potential variability in the outcome,” McTernan wrote.