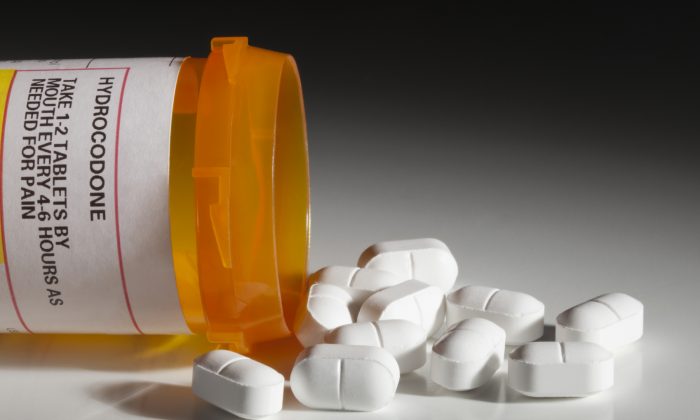 Hydrocodone tablets. Hydrocodone is said to be one of the most common recreational prescription drugs in America. (Roel Smart/iStock)
Crime and Incidents

The powerful opiate fentanyl may be responsible for killing at least 6 people and overdosing 22 others in Sacramento, Calif., according to a March 31 report by The Guardian.

In the report, a Sacramento county health officer said white, oblong pills, containing pure fentanyl and marked M367, are counterfeit and may be linked to some of the overdoses. The pills are marked to resemble generic variations of Vicodin, Lortab, and Norco, which are hydrocodone drugs.

On March 24 the first cases began to pop up and in just a few days, it had reached double digit numbers.

Smugglers who “move” fentanyl aim for higher profit because a small amount is so potent. A kilo of heroin, costing about $5,000, will sell for about $80,000 while a kilo of fentanyl costs around $3,300 and can sell for over $1 million.

The overdoses in California come just weeks after President Obama announced a plan to push $1.1 billion in funding and promised to combat the nation’s opioid epidemic.

In efforts to counteract growing addiction rates, California’s upgraded state database can now track prescriptions—to clamp down on addicts being able to hold multiple prescriptions. A side effect of this restriction is that more addicts are now looking for the drugs illegally.

“What they were saying is that they are not able to get it from their doctor anymore,” the county health officer told The Guardian.

The Drug Enforcement Administration (DEA) fears that “unfortunately, it’s likely” there will be more cases.

Laboratories in China may be producing counterfeit fentanyl, said authorities, according to The Guardian.