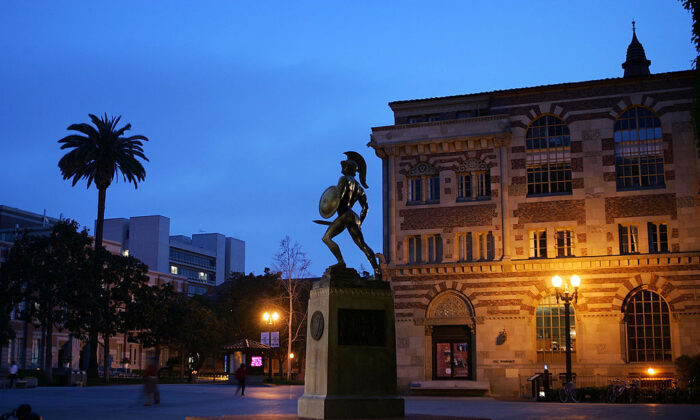 Six fraternities have disaffiliated from the University of Southern California (USC) as of Friday, Aug. 12 in protest of stricter party rules implemented earlier this year following sexual assault allegations on fraternity grounds.

University officials said in a statement on social media Aug. 13 they were “disappointed,” in the move, calling it part of a “national trend” among fraternity chapters to “eliminate university oversight of their operations.”

“This decision is detrimental and goes against 130 years of tradition,” the university’s statement reads. “We strongly urge students not to join these unaffiliated organizations or attend their events, and we will continue to uphold our high expectations for behavior in our neighboring communities.”

Spokesmen from the fraternities’ national organizations and some USC chapters were not immediately available for comment.

These fraternities will no longer have the right to use the school logo or branding, get promotions from campus-wide committees, participate in club fairs, receive personal or professional leadership opportunities from the school, or have access to the portal for campus Greek life.

After cutting ties with USC, the six fraternities formed what’s called the University Park Interfraternity Council with leaders from each fraternity overseeing their own policies.

In an Instagram post, the new council defended its actions, claiming its partnership with USC has “deteriorated” over the past several years after USC shut down its activities for nearly half of the 2021–22 school year.

“We stress at the outset that we remain deeply committed to our overall responsibilities to the USC community and to ensuring the safety of our members and guests,” the newly formed group’s leaders wrote.

The new rules were formed after hundreds of USC students protested on campus during Fall 2021 regarding multiple sexual assault allegations and alleged drugging incidents at several of the university’s fraternity houses last year, as reported by the university and several news outlets

Under the new policies, fraternities must complete pre-and post-event reports and risk prevention plans. They also must station security guards, during events and parties, at every entrance, exit, and stairwell or hallway leading to bedrooms. Guests, as well as members that live in that house, are not allowed in bedrooms during such events. All social interactions at events are restricted to common areas.