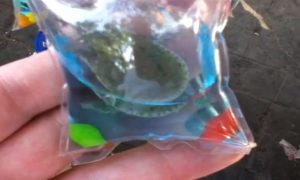 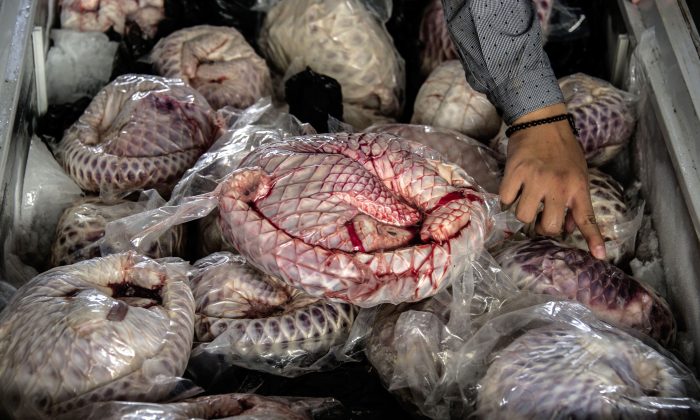 6 Animals Being Eaten to Extinction in China

In China’s Guangdong Province, there is a popular saying that people there will eat anything with four legs except a table, anything that flies except a plane, and anything in the water except a boat.

Here are six animals that are now teetering on the edge of extinction due to a seemingly insatiable demand for them coming largely from China.

It is an open secret that Guangdong’s underground markets sell tiger meat. In 2007, three live tigers were saved by the authorities after they were able to stop a truck that was smuggling tigers into the province. Three years later, in another instance of smuggling, police discovered tiger bones and fur in the back of a vehicle.

“Tiger Feasts” are allegedly popular among corrupt government officials and elite businessmen who see dining on tiger meat as a way to display their wealth to other Chinese elite, and impress their connections and clients. Professional butchers are hired to slaughter the animal for the diners’ delectation, and then package any remains for sale on the black market.

After revelers watch the killing, they indulge in delicacies such as tiger steak and ginger-infused tiger penis soup. Tiger bone wine is served as an elite indulgence in China.

In 2009, what is thought to be the last wild Indochinese tiger in China was killed and eaten. The man responsible was sentenced to 12 years in jail.

This animal is the largest amphibian on the planet, growing up to nearly 6.5 feet in length and weighing up to 110 pounds. Like other exotic animals, it is considered a delicacy in China and prized for its medicinal properties.

Chinese Giant salamander populations have declined by 80 percent over the last three generations.

In 2011, there were reports that 2.6 million salamanders were farmed in Shaanxi province alone, in comparison to the 50,000 wild population for the whole country. Farming has also caused viruses to spread to the wild population, polluting the rivers.

As the supply of Chinese turtles dwindle, American varieties have become a hot commodity.

In 2017, 170 turtles were discovered hidden in men’s socks in a cardboard box headed to China from the United States. The case marks a new and distressing trend.

“The Chinese have already driven their own species to near extinction, and now they are raiding ours,” Paul Gibbons, chief operating officer of the Behler Chelonian Center, a turtle conservancy in California, told the Los Angeles Times in 2017.

Common American varieties such as box turtles, mud turtles, and spotted turtles are in particularly high demand on the Chinese black market because their red and gold markings symbolize good fortune and, when eaten, are thought to be a source of sexual prowess. The turtles are also thought to provide a cure for various illnesses.

“Wild turtle and tortoise populations are crashing around the world,” James Liu, a veterinarian at the center and an expert on illegal reptile trafficking, told the outlet. “And reasons for that include ultra-rich folks in China who these days collect, farm, and show off turtles at events the size of auto trade shows.”

China’s golden coin turtles have been selling for up to $5,000 each since poachers claimed that medicinal extracts from the species could cure cancer.

This fish has survived two, possibly three major events that wiped out a large portion of Earth’s life, with fossil records dating back 200 million years to the Triassic era.

Yet most species of sturgeon are now endangered, and have found the biggest challenge to their survival in modern day China.

In particular, the Beluga sturgeon swim at the brink of extinction. It takes 20 years to reach maturity, and harvesting Beluga caviar necessitates killing the fish.

Caviar is considered a delicacy, and its extravagant pricing has not dissuaded China’s wealthy.

The China Sturgeon Association projects that the country will consume 100 tonnes of caviar every year by 2020—a third of the world’s total.

Also referred to as “rice birds,” the yellow-breasted bunting is critically endangered, having suffered a catastrophic decline of up to 95 per cent over the last two to three decades.

The nutritional value of the songbird has an almost mythical status in China. Every day, up to 100,000 might be delivered to restaurants when in season.

“The yellow-breasted bunting is often caught in the north of China,” Fu Wing-kan, assistant manager of the Hong Kong Bird Watching Society’s China Programme, told the South China Morning Post. “The birds are killed, plucked, frozen and then transported by road or rail to the south to be sold as a delicacy.”

Parts of the bird are often served in soup to help flush out toxins from the body.

At Qingping market, a veteran snake-seller comments, “Even if people know an animal is endangered, they will eat it if they have a disease that cannot be cured with other types of medicine.”

For many animals, the emergence of China as a wealthy consumer may very well mark the beginning of the end.

All eight species of pangolin are endangered, and their numbers are being decimated after more than one million were illegally trafficked in 2018, earning them the title of the world’s most trafficked animal.

According to China Dialogue, a chef from Shenzhen—a city in Guangdong Province—provided a description on how to butcher a pangolin: it would first be hung on a rope after being stunned with a blow to the head. Then, its throat would be slit with a sharp knife to allow the blood to drain. It would have its scales removed like plucking feathers from a chicken. Next, the carcass would be placed in heated water to remove the fine hairs, before finally, it would be gutted, cleaned, and cooked.

The chef added that the meat can be braised, stewed, or steamed in clear soup.

There is an unfounded belief in East Asia that consuming pangolin scales can cure cancer and asthma, as well as stimulate lactation.

Traditional Chinese medicine encompasses many different practices, including acupuncture, herbal medicine, tai chi, and qi gong (practices which encompass smooth movements, meditation, and mental focus). It is based on the ancient philosophy of Taoism and has a history of over 2,500 years.

Chinese medicine balances the body’s innate life forces of yin and yang, with the objective of restoring the body’s natural state of health by achieving harmony between the human body and nature.

According to principles of traditional Chinese medicine, the health of one’s body is related to one’s mind. Taoism preaches the virtues of compassion, frugality, and humility. They are connected to Jing (essence), Qi (vital life), and Shen (soul), which are the substances necessary for maintaining life.

Modern day traditional Chinese medicine has far departed from its founding Taoist principles, its practice reduced to a shell of what it once was without compassion and harmony as its guide.