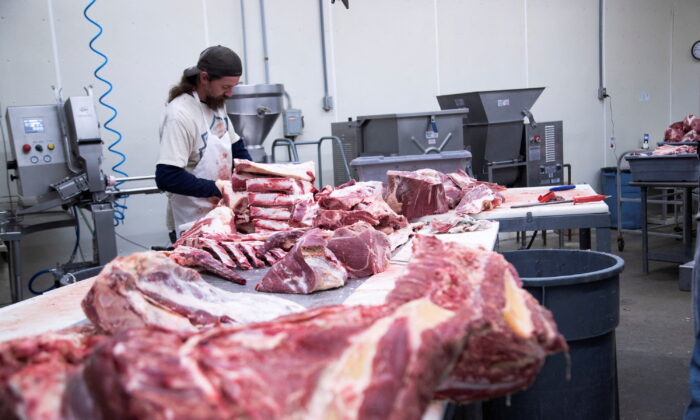 CHICAGO—A fifth-generation cattle rancher and consultant plans to build the country’s largest beef plant in South Dakota with capacity to slaughter 8,000 head of cattle a day.

The $1.1 billion project could help address the Biden administration’s concerns about rising food prices and a lack of competition in the meat sector, though it would not be up and running until at least 2026.

The project is spearheaded by Kingsbury and Associates and Sirius Realty, both run by Megan Kingsbury of a South Dakota ranching family. She told Reuters she expects construction on the plant to begin in 2023 and take three years.

Four big companies—Cargill, Tyson Foods Inc., JBS SA., and National Beef Packing Co.—slaughter about 85 percent of all U.S. fed cattle, according to industry data. The administration has blamed a lack of competition in the sector for rising food prices. Meat companies deny the accusation.

Kingsbury’s project would slaughter around 1,000 more cattle per day than the current top processor, a Tyson’s plant in southeastern South Dakota.

“That’s the kind of investment the industry is going to need in the coming years,” said Derrell Peel, an agricultural economist at Oklahoma State University.

But some industry analysts said the plant may struggle to find labor, develop supply chain relationships from scratch, and be profitable amid tighter cattle supplies.

Ranchers have reduced the size of the U.S. herd due to historic drought and low profitability, leaving fewer cattle for processors to slaughter.

Kingsbury said she is confident the new plant will overcome tight cattle supplies and labor issues. The plant aims to employ 2,500 people and use advanced technology seen in Europe and Asia to process beef with less labor, she said.

“We have to break the old mentality of the packing plant being a sweatshop,” Kingsbury said.

By Christopher Walljasper and Tom Polansek