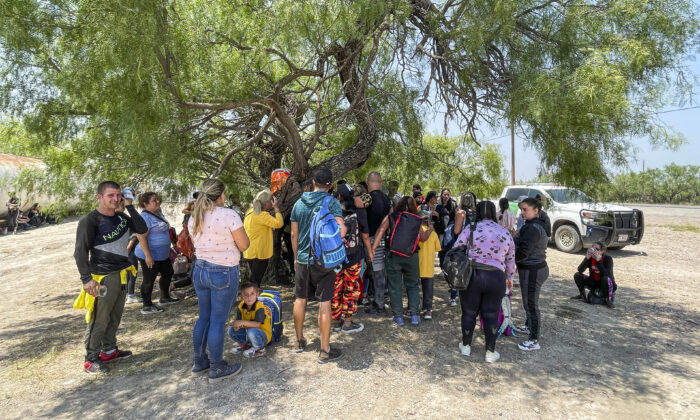 The flood of illegal immigrants and drugs coming over the U.S.–Mexico border constitutes an “invasion,” according to a majority of respondents in an NPR/Ipsos poll.

More than half, or 54 percent, said they believe it’s true or “somewhat true” that the U.S. is experiencing an invasion at the border. Republicans were much more likely to say the statement is true, with 76 percent agreeing, compared to 40 percent of Democrats and 46 percent of independents.

Under President Joe Biden, the United States has recorded unprecedented numbers of illegal immigrants crossing the southern border. Due to relaxed immigration enforcement policies, many illegal aliens have been released into the U.S. interior, while deportations have plunged. Customs and Border Protection (CBP) said migrant encounters have topped 2 million this fiscal year—a record.

Amid the immigration crisis, a number of Texas counties have declared the situation an “invasion,” including Parker County. Officials also cited drugs being brought across the border.

Seven out of 10 Republicans said that fentanyl and other drugs being brought over the border are responsible for the increase in overdoses and deaths, along with 35 percent of Democrats and 45 percent of independents.

A majority of Republicans also agreed with the statement the United States has “an open border policy.”

The NPR/Ipsos poll (pdf) was conducted online on July 28 and July 29. The sample of 1,116 adults included 516 Democrats, 317 Republicans, and 141 independents. The margin of error was plus/minus 5.1 percentage points.

A person’s main source of news affected their choices, pollsters found. Republicans who watched Fox News, for instance, were more likely to describe the border crisis as an “invasion” than those who have a different primary source. Fox regularly reports from the border, including showing footage of migrants crossing the border between ports of entry, which makes them illegal immigrants.

The most cited sources of news for Democrats and independents were ABC/NBC/CBS, while Republicans were most likely to source from Fox.

Respondents were also divided by political affiliation when answering whether there are enough immigrants in the United States. Six out of 10 Republicans agreed, versus 30 percent of Democrats and 37 percent of independents.

Democrats were the most likely to say immigrants are an important part of the American identity. Seventy-four percent agreed, compared to 49 percent of Republicans and 44 percent of independents.

Most Republicans, meanwhile, agreed with the statement that there is a “deep state,” or embedded political class, working to open the borders to more immigrants. Fifty-eight percent of Republicans agreed, along with 19 percent of Democrats and 30 percent of independents.