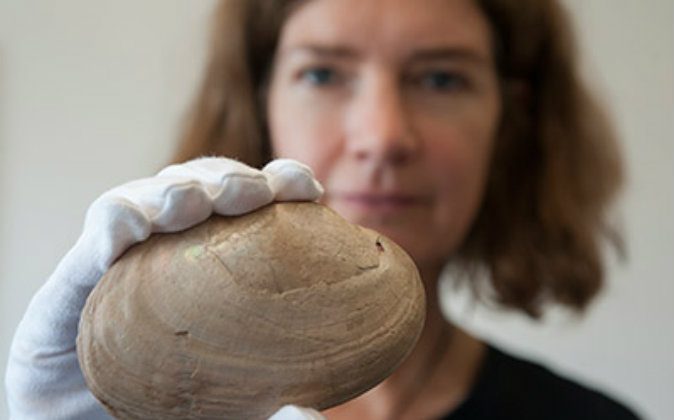 See the video below outlining studies on Home erectus and these mussel shells. (Screenshot/NWO VenC/YouTube)
archaeology

An international team of researchers published research on Dec. 3 showing that a 500,000-year-old mussel shell bears the oldest engraving ever found—it’s four times older than the engravings in Africa previously thought to be the oldest.

José Joordens, an archaeologist at Leiden University in the Netherlands and lead author of the article in the journal Nature, said in a university news release: “It suddenly appears that Homo erectus was more capable than we thought. Current archaeological assumptions about these early humans, who lived from 1.9 million to 400,000 years ago, will have to be revised.”

An engraving on a piece of ochre by Homo sapiens (modern man) was previously the oldest, dating from about 100,000 years ago. Two dating methods placed the simple zig-zag engravings on the shell between 540,000 to 430,000 years of age.

The shell came from an excavation site on the Indonesian island of Java and it was part of a collection at the Naturalis Biodiversity Center in Leiden for more than a hundred years before the engraving was noticed. Researchers working with the shells were studying the clever way Homo erectus used a sharp tool, possibly a shark’s tooth, to pinpoint a part of the mussel that would cause the shell to open if pressed. While conducting this research, they noticed the engraving.

Wil Roebroeks, professor of palaeolithic archaeology at Leiden University, said in a news release: “It’s fantastic that this engraved shell has been discovered in a museum collection where it has been held for more than a hundred years. I can imagine people may be wondering whether this can be seen as a form of early art.”

But, he continued, “At the moment, we have no clue about the meaning or purpose of the engraving.”