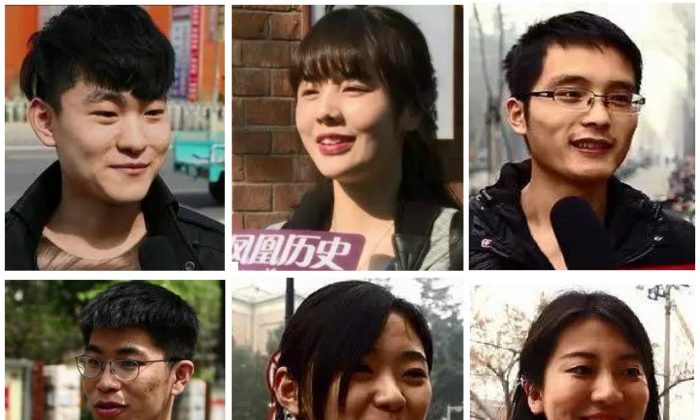 50 Years After the Cultural Revolution, China’s Youth Have No Idea What It Was About

May 16 marks the 50th anniversary of the Great Proletarian Cultural Revolution, a destructive Chinese political movement launched by communist dictator Mao Zedong. The campaign created tens of millions of victims, particularly among intellectuals and other “class enemies.”

In ten years of mandated chaos, millions were killed or driven to suicide in state-sanctioned violence, while zealous young ideologues, the infamous Red Guards, travelled about the country destroying and denigrating China’s traditions and heritage.

While a whole generation, now living and working as China’s leaders and entrepreneurs, bears the scars of this campaign that defined their formative years, the hand of the Communist Party precludes candid reflection or reassessment of the Cultural Revolution.

Much of China’s modern youth is worryingly unaware of, or completely mistaken as to what happened during the Cultural Revolution, and why it happened, as revealed in a recent television broadcast by Phoenix Television.

“It brought changes beyond recognition,” one young woman said. Two others associated the Revolution with “spiritual freedom” and “idealism.”

More frequently, thoughts were very short. They echoed the standard responses set by officially-approved school textbooks and expressed in state-run publications like the Global Times: the Cultural Revolution was a mistaken cause, misused by some opportunists, and a time of chaos.

Asked about the campaign’s place in modern discussion, respondents who did not report a lack of knowledge or interest in the historical episode shied away for practical reasons.

“It’s not that I don’t find it interesting,” said one young man with bouffant dyed hair, “but that there are some prohibitions given the present state of our nation.”

Those with any detailed knowledge of the movement seem to have obtained the information from the diffuse experiences of their elder family members. But more commonly, the wanton brutality and human tragedy that swallowed up a generation of Chinese in fear, distrust, and cynicism has been systematically buried by the modern state education system.

Some respondents placed the Nanjing Massacre, which happened during the Japanese invasion of China in 1937, as an event that took place during the Cultural Revolution. Others attributed positive developments to the campaign.

“It certainly does seem to have cracked down on the corrupt elements,” said a woman in glasses. “Chairman Mao dealt a severe and strict blow to corruption by shooting first and asking questions later.”

Still others suggested that the violence of the Cultural Revolution, in which students typically slandered, beat, and even killed their teachers, was not something that could have been prevented or avoided by the efforts of common Chinese.

“If I was in that era,” one man said, “I would be just like those people. I would certainly support Chairman Mao.”

“I think I’d go with it, since I’m a very zealous young person,” a woman said.

“It’s an outburst of energy for the nation, I guess,” responded a young woman with bangs.

Others qualified their answers, saying that pressure from the group would have likely moved them to act regardless of their personal convictions.

One young man said: “Under such an atmosphere, this kind of thing is not really up to us.”