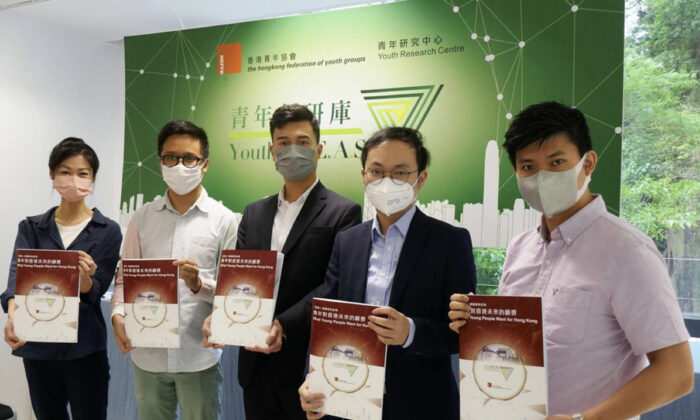 The Youth Research Center published a study on "Young Hongkongers’ Vision for Hong Kong’s Future,” and finds that nearly half of the Hong Kong youth are pessimistic about Hong Kong's future development. (Photo from the website of HKFYG)
HK Current Affairs

The latest Hong Kong Chief Executive, John Lee Ka-chiu, declared before he took office, “There are many issues in Hong Kong, let’s solve one each day. I will also prioritize our housing issues as soon as I am sworn in.”

The general public has high expectations of Lee. A youth organization released a study report on June 3, 2022, “Young Hongkongers’ Vision for Hong Kong’s Future.” It shows that the issue of youth housing has become the top issue that young people most expect the new chief to resolve first.

Nearly two-thirds of the interviewees think the new government urgently needs to deal with the housing shortage in Hong Kong.

On the other hand, about 50 percent of Hong Kong youth are pessimistic about the city’s future development, and almost 40 percent of them hope to see Hong Kong as a free city after ten years.

The Youth Research Center, which was established by The Hong Kong Federation of Youth Groups (HKFYG), published a study on “Young Hongkongers’ Vision for Hong Kong’s Future.” The online survey was conducted from May 13 to 29, 2022, with 1054 HKYFG members aged between 15 and 34.

The results show what young Hongkongers expect the new government can do for them. Solving youth housing is the most urgent at 45 percent, followed by, listening to youth voices at 35.3 percent, and mending its relationship with the young people of Hong Kong.

Of most of the social issues being discussed, nearly two-thirds (66.5 percent) agree that the new government must urgently address the housing shortage.

However, the study also finds that nearly half of the Hong Kong youth are pessimistic about Hong Kong’s future development, while less than 20 percent are optimistic.

In addition, nearly 40 percent of the interviewees hope to see Hong Kong being a free city 10 years from now, followed by stability and prosperity at 32.4 percent and livability at 25.2 percent.

The core values of which the youngsters want the government to achieve the most, are unsurprisingly, freedom at 59.7 percent, democracy at 41 percent, and rule of law at 35.9 percent. The result displays that freedom is something that the youth is concerned about.

Conversely, 63.6 percent of the participants do not trust the authorities, which reflects there are trust issues between the two.