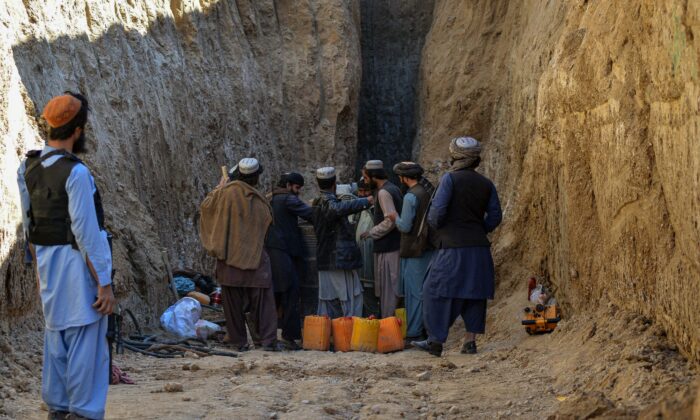 Rescuers try to reach and rescue a boy trapped for two days down a well in a remote southern Afghan village of Shokak, in Zabul province about 120 kilometers from Kandahar, on Feb. 17, 2022. (JAVED TANVEER/AFP via Getty Images)
Afghanistan

A five-year-old boy, who had been stuck for three days in a well in a southern Afghanistan village, was declared dead on Feb. 18 by officials.

A rescue operation was launched to pull the child, identified as Haidar, out from the well in Shokak village of Zabul province, where he had been trapped since Feb. 15.

According to Zabul police spokesman Zabiullah Jawhar, the boy was still breathing when they pulled him out of the well but he was eventually declared dead.

“In the first minutes after the rescue operation was completed, he was breathing, and the medical team gave him oxygen,” Zabiullah told reporters. “When the medical team tried to carry him to the helicopter, he lost his life.”

Haidar’s grandfather, Haji Abdul Hadi, told AFP that his grandson fell into the well while attempting to help people dig a new borehole in the parched village.

Haidar reportedly slipped to the bottom of the 80-foot (25-meter) shaft before being pulled up by several onlookers with a rope. They managed to pull the boy to about 10 meters (32 feet) from the shaft’s opening, but the passage was too narrow that Haidar became trapped.

Rescuers then launched a drilling operation and dug an open slit trench from the surface to reach Haidar, but were blocked by a large rock at some point. Rescuers were only able to reach Haidar after more than 30 hours, according to a BBC report.

In video footage of the rescue effort posted on social media, Haidar is seen moving his arms and upper body.

His father can be heard saying in the video: “Are you okay, my son? Talk to me and don’t cry, we are working to get you out.”

The boy had stopped communicating a day before being rescued from the well.

The incident follows the case of a five-year-old Moroccan boy, Rayan Awram, who was trapped for five days in a well in Ighran village. Rayan was declared dead on Feb. 5, after being pulled out of the well by rescuers.