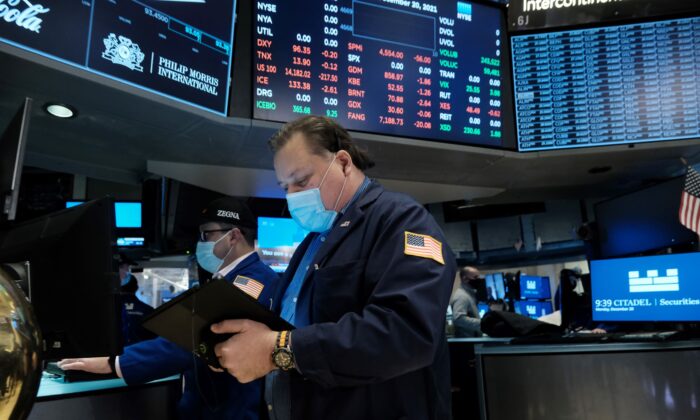 A trader works on the floor of the New York Stock Exchange (NYSE) at the start of trading on Monday following Friday’s steep decline in global stocks over fears of the new omicron COVID variant on Dec. 20, 2021 in New York City. (Spencer Platt/Getty Images)
Stocks

A squeeze can occur when short sellers are forced on buying in to cover their position, which has caused shares to go much higher on many occasions.

Data from Fintel, which requires a subscription, provides a look at several of the top shorted stocks and data showing how likely a short squeeze is to occur.

This week’s leaderboard includes only one name from last week’s top five and a new name to the list that recently announced a major merger.

Here’s a look at Fintel’s top five short squeeze candidates for the week of Jan. 3.

Digital advertising company Insignia Systems Inc. tops the short squeeze leaderboard to start the 2022 trading year. Raw short interest in ISIG is up more than 2,500 percent from the last reporting period and Fintel shows 61.6 percent of the company’s public float short. The cost to borrow on shares is 556 percent, which is the highest Fintel has seen in recent history. The high short percentage and cost to borrow could make the stock an ideal candidate for a short squeeze.

IT solutions provider American Virtual Cloud Technologies Inc. ranks second on the short squeeze leaderboard for the week. Around 11.5 percent of the public float is shorted and Fintel shows short interest up over 3,400 percent from the previous report. The reported cost to borrow on AVCT shares is 191.7 percent, which is among the highest on the list.

Men’s health pharmaceutical company Petros Pharmaceuticals Inc. is the lone carryover in the top five ranked stocks and remains in third place on the leaderboard. Fintel reports 24.4 percent of the total float short, up from last week’s 17 percent. The cost to borrow on shares of 176 percent is down from the last three week’s reported 268 percent, 254 percent, and 240 percent, respectively. The stock previously topped the leaderboard for several weeks.

Multiscreen video solutions company SeaChange International Inc. made headlines when it announced recently it would merge with video provider and TikTok competitor Triller. Short interest in SEAC is up 751 percent from the prior report, which Fintel points out could indicate increased negative sentiment by short-sellers. The cost to borrow on SEAC shares is 24.4 percent, which is the lowest on the leaderboard. Fintel reports 13.1 percent of the SEAC tradeable float short. The stock could be one to watch with its first appearance on the leaderboard with the pending merger.

Clinical stage biotech company Ensysce Biosciences Inc. is seeking to bring tamper-proof opioids to market. The company is ranked fifth on the Fintel short squeeze leaderboard. Fintel shows 10.9 percent of the total float short with raw short interest up 702 percent from the previous report. The cost to borrow on ENSC is 211.8 percent, which is among the highest for the week.