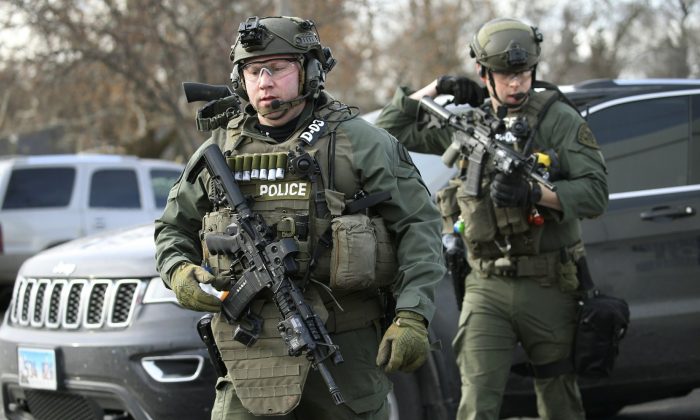 Police officers armed with rifles gather at the scene where an active shooter was reported in Aurora, Ill., Friday, Feb. 15, 2019. (Antonio Perez/Chicago Tribune via AP)
Crime and Incidents

Aurora Police Chief Kristen Ziman said the gunman, identified as Gary Martin, 45, was an employee at the industrial complex.

“We have an active shooter incident at 641 Archer Av. This is an active scene. Please avoid the area,” the Aurora Police Department said in a tweet shortly after 2 p.m. local time, adding that additional details would be forthcoming.

The city of Aurora, which is roughly 50 miles west of Chicago, tweeted about an hour later that a suspect had been arrested.

“EMERGENCY UPDATE | 3 p.m. local time THE SHOOTER HAS BEEN APPREHENDED! The area is still on lock down! More information will be provided soon,” the city said.

At least one person was killed in the attack, a spokesman for the Kane County Coroner said.

Two of the people injured in the shooting were taken to Rush Copley Medical Center in Aurora where they are being treated for non-life-threatening injuries, hospital spokeswoman Courtney Satlak said in an email to Reuters.

The wounded police officers were in stable condition at a local hospital, Clayton Muhammad, spokesman for the City of Aurora, told the local ABC affiliate.

AURORA UPDATE: Five people are dead at the scene of a shooting at a company in Illinois. Police have identified the…

Witness John Probst told CNN in an interview that he saw the gunman, a co-worker, running down an aisle of the manufacturing facility with a pistol equipped with a laser sight. Probst told the network that he saw people bleeding.

West Aurora School District 129 said on Twitter that all students in the district were being held in a “soft lockdown” on direction of the county sheriff.

We have just received word that we have the all clear to lift the soft lockdown and begin dismissing schools and will dismiss in the following order with 40 minutes interval starting immediately…. https://t.co/Nahfv8mp43

A spokeswoman for U.S. President Donald Trump said that he was aware of the incident.

“The President has been briefed and is monitoring the ongoing situation in Aurora, IL,” Sarah Sanders said in a written statement.