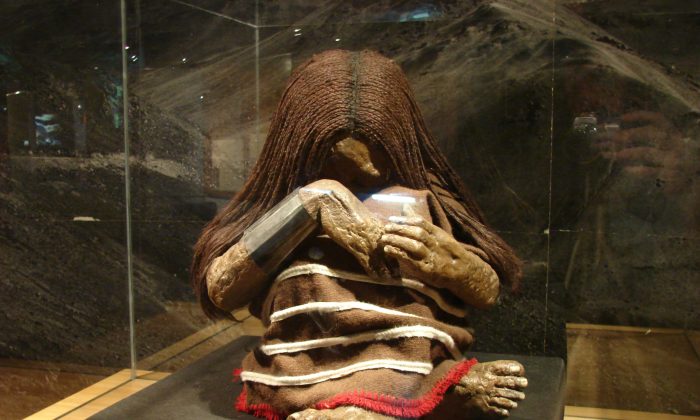 A replica of a mummy of a young Incan boy on display at the National Museum of Natural History in Santiago, Chile. (Jason Quinn via Wikimedia Commons)
archaeology

When describing the discovery of an ancient love letter placed upon the body of a loved one, Chris Scarre, head of the archaeology department at the University of Durham, said: “Archaeologists who investigate tombs are often moved to wonder about the character of the deceased, the thoughts of the mourners and their hopes and fears on the passing of a person dear to them.” Such is the case in the five cases below. They are both heart-warming and heart-breaking, and they bring to life in raw detail the lives of those who lived before us.

Love stories are ageless and show the beauty of human nature. This is the story of Fabius Maianus a regular citizen of a former Roman city in Germany who lived between the 2nd and 3rd century AD. His story is written in stone engraved on the sarcophagus of his wife, Valeria which was found near Pavia in Italy close to the city of Milano. The inscription describes the story of Fabius and Valeria and their affectionate and loving marriage. Unfortunately, their marriage lasted approximately 10 years because Valeria died at the age of 27 in Italy. Their love was so strong that Fabius travelled 600 miles to bring his beloved wife to Pavia which was their homeland. Doing a 600 mile journey in that period of time was a huge task that few would do. Such an action shows the depths of love that Fabius had for his wife.

Their bodies were discovered just as they had been left – the remains of three Incan children frozen in time atop the summit of Volcan Llullaillaco in Argentina – their delicate and fragile features still perfectly preserved. The bodies of the 13-year-old ‘Maiden’ and her 4- to 5-year-old companions, Llullaillaco Boy and Lightening Girl, were found ten years ago but new studies conducted this year  revealed not only their final moments, but what the last year of their young lives had been like. The children had been drugged and given alcohol on a regular basis as part of a year-long series of ceremonial processes leading up to their final sacrifice. Archaeologists made the discovery after analysing hair samples from the frozen mummies, which revealed that all three children had consistently been given coca leaves (from which cocaine is derived) and beer. In addition, although they all appeared to have had a peasant background as their diet consisted mainly of common vegetables, they all ate the food of the elite leading up to their death. This supported historical accounts suggesting that a few children were selected and prepared for their sacrifice as part of the Incan sacred ceremonies.

Nothing is more heart-breaking than the grave of a child whose innocent life ended before it could barely begin. Such was the case when archaeologists discovered tiny urns containing the cremated remains of babies dating back two-and-a-half millennia in the Polish village of Łęgowo near Wągrowiec. In one grave, archaeologists found a tiny urn next to a baby’s rattle in the shape of a pillow made from clay and filled with small balls, in another they found a spoon with a handle shaped like a bird, while a third contained a decorated bowl with a small bird-like figure inside. All were the gifts offered to the tiny children by their parents to take with them on their ‘last journey’.

“I just want to go to you. Please take me to where you are. My feelings towards you I cannot forget in this world and my sorrow knows no limit. Where would I put my heart now and how can I live with the child missing you… When I give birth to the child in me, who should it call father?”

These are the heart-breaking words of a pregnant woman grieving for her dead husband, and for nearly half a millennium they lay buried in earth placed on top of the mummified body of Eung-tae, a member of Korea’s ancient Goseong Yi clan, which was unearthed in Andong City, South Korea.

Archaeologists revealed an incredible discovery in a village in the Novosibirsk region of Siberia where scientists studied some 600 Bronze Age tombs – dozens of them contained the skeletal remains of couples clutching onto each other in loving embrace. The ancient burials were found near the village of Staryi Tartas and are said to date to between the 17th and 14th centuries BC. The couples had been buried with care, facing each other, some with their hands still clasped together seemingly for eternity. Around them were grave goods including bronze decorations, ceramic pottery, armaments and more personal belongings such as gaming pieces and a mould for casting earrings and pendants.  Archaeologist Vasiliy Labetskiy said: “The best fairy tales have always ended ‘They lived happily ever after, and died on the same day’. It is quite astonishing how the fairy tales become life, as the bronze burials tell us a story how some people were not divided even by death.”