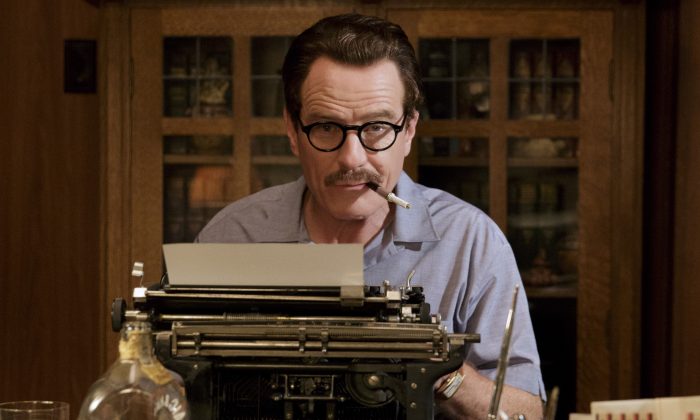 The Epoch Times film critic sifts through the 60–70 film offerings of November 2015, and picks five. The choices are based on which movies will have the most visibility and potential to impact culture, especially (but not always) in a positive way, and collates some critique excerpts from fellow reviewers from other news publications.

James Bond peels the layers of deception off a deadly organization, while M fights  to keep Her Majesty’s Secret Service alive.

In many ways “Spectre” is the purest Bond experience of the Craig era. Stylistically, it’s a film that looks and feels like a modern action movie—clearly no expense was spared in executing the pulse-quickening aerial stunts and seat-shaking set-piece pyrotechnics that break up the shaggy plot. For all that, the 24th installment in the franchise is unavoidably a 21st century spectacle, however, narratively speaking it is underpinned by a reluctance to break from tradition.

For all its flaws, overreaching ambition, and excessive running time, this is a prestige picture on a huge scale. You get literally more bang for your buck than any other movie. You can feel the quality in the supercar chase through Rome, in the high-speed pursuit by boat down the Thames, and as Bond indulges in an alpine game of chicken, played out with a plane and a convoy of SUVs.

“Spotlight” is the true story of how the Boston Globe exposed the horrendous child molestation scandal and cover-up within Boston’s Catholic archdiocese, which turned out to be like pulling a strand of yarn on a sweater, unraveling secrets of the entire Catholic Church.

Seconds after the credits for Tom McCarthy’s “Spotlight” roll, an overwhelming feeling of changing your career takes over. Is film criticism really where I belong?  What important, life-changing story am I not writing about? Truth is, quite a number of classic films give off that same feeling. “Rocky” made a bunch of our fathers and older brothers go for a morning run and drink raw eggs. “Rudy” made us want to go out and play Notre Dame football. “Spotlight” makes you want to go down to your local courthouse and search the public records for clues. Then, get on the phone, with a pen and a pad, and start asking some really tough questions. Honestly speaking, “Spotlight” is the best investigative news drama this century.  Matter of fact, behind “All the President’s Men” and maybe “The Insider,” it’s among the best ever made.

My biggest fear going into “Spotlight,” the historical drama, which re-enacts the Boston Globe’s exposé of clergy sex abuse in the Roman Catholic Church, was that auteur Tom McCarthy would find some way—probably through lionizing the journalists—to recast this horrific chapter of our history into a feel-good story. In America, we don’t mind movies that ask us to pity victims. But we sure seem to hate anyone or anything that asks us not to feel quite so good about ourselves.

I had nothing to worry about.

If anything, Walter Robinson’s (Michael Keaton) biggest epiphany is a bit of a Schindler moment: Why didn’t I do more? As Robinson and his team of investigative reporters act as our surrogates, they don’t lead us into the temptation of self-righteous hindsight, nor do they deliver us from realizing that we’re complicit in our silence. “Spotlight” is a serious film, both artistically and morally, and it wrestles with explosive content while never feeling exploitative or self-aggrandizing.

The year was 1947, and Dalton Trumbo was Hollywood’s top screenwriter. Then he and fellow writers were blacklisted for their political beliefs and thrown in jail.

The House Un-American Activities Committee was active during the ’40s until 1975. Its purpose was to root out American Communists, particularly in the showbiz industry, to subpoena them and, if they refused to testify or abstained from naming names implicating their fellows, they could be blacklisted.  Blacklisted screenwriters and actors could not get a job anywhere if they were on the blacklist, so fearful witnesses might do what the committee wanted, cowards that they were …

The actors who performed in various roles as Trumbo’s friends, family, and employers generally look like the people they portray.  Bryan Cranston, best known as Walter White on the AMC drama “Breaking Bad,” takes on the title role with his Salvador Dali mustache and wide-framed glasses.  He is not a choice made because of his name and popularity, but his selection as Dalton Trumbo has been most wise …

This is really a terrific movie, and what’s more to its credit, it’s about a screenwriter. Screenwriting often makes or breaks a movie, yet those who use the typewriter rather than a megaphone are often neglected …

You don’t want to miss this film. Jon Stewart could not have done a better job in skewing the extreme right wing, a faction responsible for making even the current Congress a laughing stock among people who think.

The combination of human interest and a sprinkling of star power—Antonio Banderas plays “Super Mario,” the unofficial leader of the trapped diggers; Juliette Binoche is unlikely casting as a feisty empanada saleswoman—should generate interest in this feel-good tale of survival against the odds. However, the claustrophobic prospect of spending over two hours 2,300 feet underground with a bunch of sweaty men might make this a tough marketing prospect …

Accompanied by a score, which goes big on South American flutes and guitars, photogenic peasants hold candles aloft. There are lots of man-hugs and macho tears. It’s as though Riggen directs from a checklist of proven emotive shots. However there is no question that this is an extraordinary tale of human fortitude and resilience: at least some of the tears that will be shed in the film will be honestly earned.”

(No critic reviews available yet)

“Rocky” made a bunch of our fathers and older brothers go for a morning run and drink raw eggs.
— Clayton Davis, AwardsCircuit.com

It’s the seventh Rocky film! Adonis Johnson’s dad, Apollo Creed, died before he was born. But the apple didn’t fall far from the tree. Johnson goes to Philly, where dad first fought Rocky Balboa, in a legendary match. Rocky sees Apollo’s qualities in his son, and becomes his mentor. Can’t go too wrong here on the entertainment level. And there needs to be more mentoring in the world today.