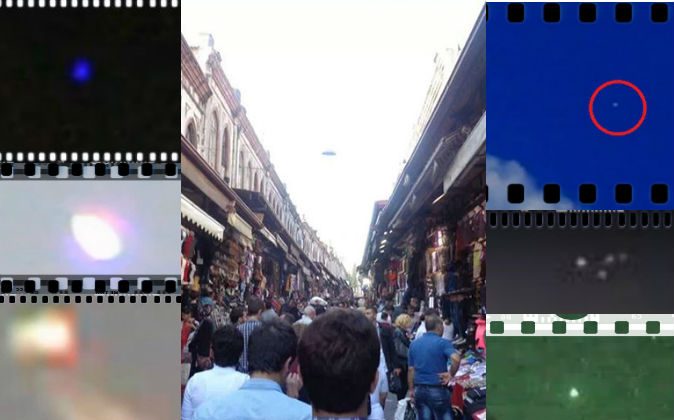 UFO sightings from across the world on the week of March 7 to 14, 2014.
Life Beyond Earth

Mexico also had numerous sightings in February. A Mexican television station got some gear together and hunkered down for multiple days and nights in an area where sightings are frequently reported, to capture UFO footage published this week.

Here’s a look at the top five reported sightings this week.

A blue UFO sighted in Anaheim, Calif., on March 12, 2014. (Screenshot/TheTruthBehindUFOs/YouTube)

In Anaheim, Calif., on March 12, this footage of a UFO was recorded and obtained by TheTruthBehindUFOs.com. The object appears white at first, but then it flashes blue and moves back and forth in the sky, occasionally changing color.

The man recording the video comments, “The movements are so unusual.”

2. A UFO Enters a Contrail in California

A UFO enters a contrail in California in March, 2014. (Screenshot/Crrow777/YouTube)

“Chemtrails” meet UFOs—there’s a lot of fuel here for discussion in some social circles. Some people believe contrails left by aircraft contain chemical components intentionally put there by governments to control atmospheric elements or even to have certain effects on human beings. Contrails are thus sometimes called chemtrails.

The object that appears in this video clip simply seems to be passing through.

This footage was uploaded to YouTube on March 11 by user Crrow777, who takes an active interest in filming the sky on the look-out for UFOs.

The crew used night-vision technology and high-definition cameras. While some of the objects look like shooting stars, one large object slowly approaches a nearby volcano. Some daylight footage shows a strangely shaped object in the sky with dual contrails behind it. It disappears from sight.