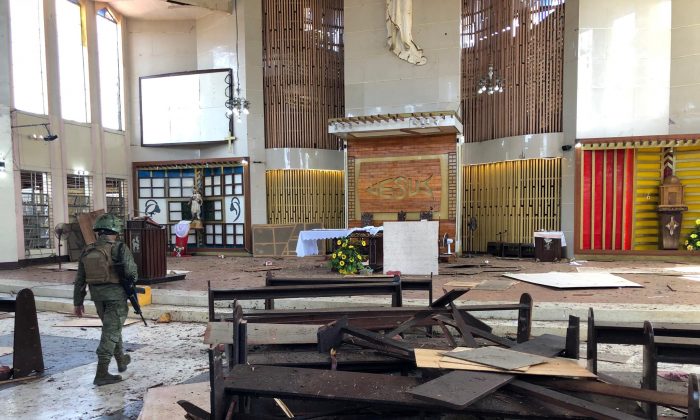 A Philippine Army member inspects the damage inside a church after a bombing attack in Jolo, Sulu province, Philippines January 27, 2019. Armed Forces Of The Philippines (Western Mindanao Command/Handout via Reuters)
Asia & Pacific

A senior Abu Sayyaf operative and four members of the Islamic terrorist group believed to be behind the deadly bombing of a church in the southern Philippines surrendered to authorities over the weekend, the national police chief said on Feb. 4.

Kammah Pae, whom authorities believe to have aided an Indonesian couple in the Jan. 27 suicide attack, gave himself up to government troops, Oscar Albayalde said.

“He was forced to surrender,” Albayalde told a media briefing. “He probably didn’t want to die during the military offensive.”

Philippine troops killed three suspected Abu Sayyaf terrorists and suffered five fatalities in a firefight on Jan. 2 in Patikul, a town in the province of Sulu as troops pursued those behind the church attack.

Albayalde said Kammah denied involvement in the twin bombings at the Jolo cathedral that killed 23 people, including civilians and soldiers, but eyewitnesses’ accounts showed he escorted the Indonesian couple.

The five suspects will face multiple murder charges, among others, Albayalde said.

However, the investigation into the church bombing in Sulu, a known stronghold of the Abu Sayyaf group, is “far from over,” he added.

Abu Sayyaf is a terrorist organization notorious for kidnappings and extremist factions and has pledged allegiance to ISIS.

“There are more pieces of evidence that need to carefully examined,” Albayalde said.

Before Philippine President Rodrigo Duterte suggested on Jan. 29 that the twin explosions may have been a suicide attack, military and police said the bombs within and outside the church appeared to have been detonated remotely.

A few days later, Duterte’s interior minister, Eduardo Ano, said that suicide attack was carried out by an Indonesian couple with the help of Abu Sayyaf.

That would be in line with a claim of responsibility by ISIS via its Amaq news agency early on Jan. 4.

The Philippines vowed to destroy those behind twin bombings that killed 20 people during a Jan. 27 church service in the country’s restive south, six days after a referendum on a peace agreement between the government and Filipino Muslims in the region returned an overwhelming “yes” vote.

The attack wounded more than 100 people and was one of the deadliest in recent years in a region long plagued by instability. It came amid hope and excitement about the ratification of a devolution plan that aims to bring development, jobs, and peace to one of Asia’s poorest and most volatile places.

The first explosion went off inside the cathedral on Jolo island, in Sulu province, and was followed by a second blast outside, which was detonated as security forces raced to the scene, officials said.

“The enemies of the state have boldly challenged the capability of the government to secure the safety of the citizenry in that region,” said Salvador Panelo, spokesman of Philippine President Rodrigo Duterte.

“The armed forces of the Philippines will rise to the challenge and crush these godless criminals.”

ISIS claimed responsibility for the attack via the extremist group’s Amaq news agency, describing it as twin suicide bombings that it said killed 120 people.

Police are investigating but suspect it was the work of Abu Sayyaf, an extremist group embedded in the Philippines that has pledged allegiance to ISIS and are blacklisted by the United States and the Philippines as a terrorist organization because of years of bombings, kidnappings, and beheadings. They also go by the name ISIS-Philippines Province.

Civilians bore the brunt of the attack, which also killed five soldiers. Police lowered the death toll from 27 to 20, after discovering duplications in initial records.

Jolo is a stronghold of the group, which runs a lucrative piracy and kidnapping operation that successive governments have failed to break up. The group, which operates in the waters and islands of western Mindanao, has beheaded numerous foreign captives when ransom demands were not met.

Images of the inside of the Jolo church showed several rows of wooden pews destroyed, with debris strewn across a blackened floor.