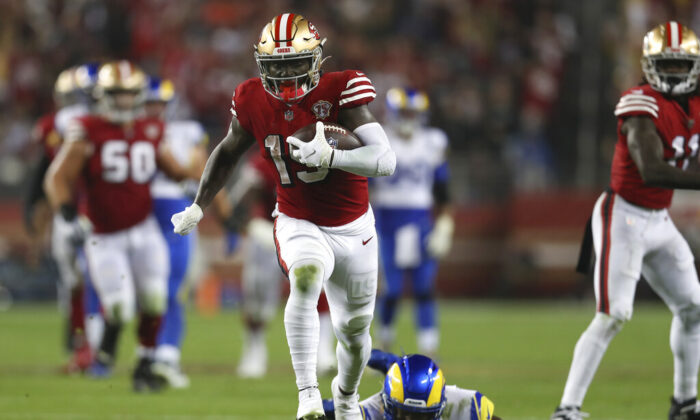 49ers Dominant in Much Needed Fifth Straight Win Over Rams

In essentially a must-win situation, the San Francisco 49ers dominated their divisional rival, the L.A. Rams, to keep their playoff chances alive with a 31–10 victory on Monday Night Football.

The result is considered an upset as the Niners were struggling near the bottom of the NFC West Division with a 4–5 record, while the Rams are one game behind Arizona in second place with a 7–3 record.

The Niners outgained the Rams, 335 yards to 278; and in the process broke a five-game losing skid at home since last year.

Niners coincidentally, beat the Rams on Oct. 18, 2020. It was also just their second win in the past seven games.

On the receiving end was Deebo Samuel, who had five receptions for 97 yards and rushed five times for 36 yards; catching a touchdown pass and rushing for another.

Niners running back, Elijah Mitchell, gained 91 yards on 27 carries; his longest for 17 yards.

The game began with the Rams QB, Matt Stafford, throwing a deep ball on the fourth play to WR Odell Beckham.  This was Beckham’s first game with the Rams after he was recently traded from the Cleveland Browns.

There was obviously a breakdown in communication, as Beckham aborted the end of his route once encountering some tight double-team coverage.

Nevertheless, Stafford had thrown the ball, which resulted in the first of two interceptions by Niners Jimmie Ward. Ward would score a pick-six following his second interception on the Rams following drive.

Niners would score a touchdown on their opening drive, which covered 93 yards in 18 plays, for 11:03 minutes of possession.

Coached by Kyle Shanahan, the Niners’ strategy was power football with a running game to maintain ball possession.

Thus effectively keep the explosive Rams offense off the field and controlling the clock. It worked as the Rams defense had no answer in stopping the Niners.

The Rams offense did counter on their next possession to initially keep the game close with a seven-play drive of 75 yards that only lasted 2:33 minutes; culminating with a Stafford pass to Tyler Higbee of 10 yards for a TD.

14–7 would be as close as the Rams would get as the Niners came back with another long touchdown drive of 7:52 minutes, for 91 yards through 11 plays; finishing with Samuel scoring on an eight-yard run to widen the lead to 21-7.

San Francisco further increased its lead to 24-7 with a 50-yard field goal by Robbie Gould with 4:38 remaining in the third quarter.

The 49ers put the game away in the fourth quarter when Garoppolo connected with Samuel on a 40-yard touchdown pass, on fourth-and-6, to make it 31-7 with just 11:07 minutes remaining.

“It was good,” Garoppolo said. “Honestly, like very similar to the Super Bowl Year. I felt like we ran the ball 30 times, every time that year, and be successful on third down,” he said. “It’s a good recipe for us.”

The Rams’ first half of the season had been quite successful. The front office made excellent trades to position themselves for the best opportunity to reach the Super Bowl which will be played in their home SoFi Stadium.

But on Monday it didn’t work out for them.

The first trade was defensive-line rusher and future Hall of Famer, Von Miller, who started slow in his first game with the Rams making three tackles; but was unable to sack or pressure Garoppolo.

The other recent acquisition of Beckham happened in a timely manner as one of their top receivers, Robert Woods, suffered a torn ACL in one of the last practices before the game.

Beckham was thrown the ball three times and was only able to muster two catches for 18 yards.

“I was excited,” Beckham said. “I felt like I was ready for the moment. I feel like I’ve been through so much, and God has put me in this position for that exact moment, and it just wasn’t our night.”

Rams coach Sean McVay had some explaining to do following their second loss in a row.

“It wasn’t just one guy in particular, it was a handful of different guys,” said McVay. “So everybody had a hand in this tonight. And that’s where we got to look at ourselves, look inwardly first and foremost, and then be able to move forward accordingly,” he said.