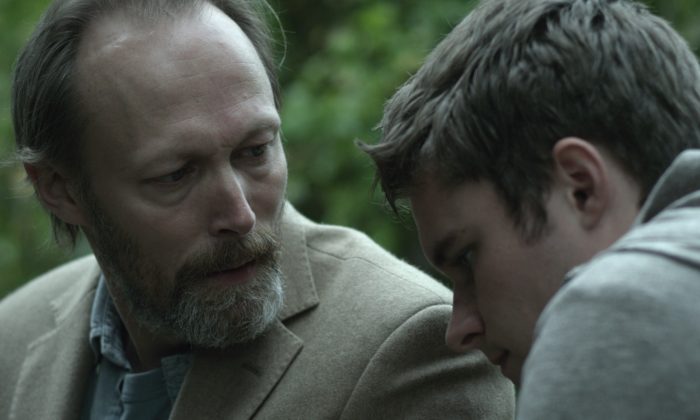 Peter (L, played by Lars Mikkelsen) and Richard Karlsen (R, Jack Reynor) in “What Richard Did,” a dramatic film about Richard transitioning though life. (Courtesy of Element Pictures)
Entertainment

Movie review: ‘What Richard Did’

As an alpha male, Richard Karlsen enjoys all the benefits of Ireland’s class stratification and patriarchy. When he commits an irreversible act, it should be relatively easy for his parents to circle the wagons of privilege around him. Is he a strictly deterministic creature, or is he an independent ethical agent? That will possibly be determined in Lenny Abrahamson’s “What Richard Did.”

Frankly, as teenagers go, Karlsen is absolutely brimming with empathy. Of the seniors on the rugby team, he is always the one who looks out for the new initiates. He is also close to his parents, sparing them any brooding teen angst. (His Swedish expat father and Irish mother are clearly loaded, though, a fact that will loom over cynics’ response to the film.)

Come autumn, Karlsen will enroll in college. But until then, he idles the summer away with his mates, including his less well-to-do teammate Conor Harris, who is more of a frienemy.

Karlsen woos away his girlfriend Lara, which is hardly edifying, but these things happen at that age. At least Karlsen really works for it, pulling out all the romantic stops. Then something unpremeditated but profoundly wrong happens.

“What Richard Did” is hardly “Crime and Punishment,” let alone the “Tell-Tale Heart,” but the remorseful Karlsen will be forced to wrestle with his conscience while sequestered by his parents. Abrahamson eschews cheap theatrics at every stage, depicting Karlsen’s guilt and mounting disappointment in his own moral failings without sentiment or sensationalism.

Yet, Abrahamson falls under the sway of his lead nearly as much as the supporting characters. In long, closely observed scenes, we witness his easy charm and camaraderie. Yes, Harris brings out his petulant streak, but these are a couple of immature kids. Indeed, the unspoken question frequently ought to be: Where are all the parents?

While Abrahamson’s patience in setting the scene and establishing the social dynamics among the characters is admirable, his efforts make the film top-heavy with exposition and rather repetitive carousing sequences.

Jack Reynor is about to become world famous as the co-lead of “Transformers 4.” Fortunately, he is sure to get many positive notices as Karlsen before the guilt-by-association-with-Michael Bay reviews come in. Charismatic but grounded, there is something spooky about his performance that may well evoke memories of team captains (or some such equivalent) viewers knew in high school.

Lars Mikkelsen (not Mads), also has some nicely turned moments as Karlsen’s understanding (perhaps to a fault) father, Peter.

Wisely, Abrahamson and screenwriter Malcolm Campbell changed the title of Kevin Power’s source novel “Bad Day in Blackrock,” lest anyone confuse it with the Spencer Tracy classic. Despite the crime committed, “What Richard Did” is strictly a drama, willfully avoiding any thriller trappings. Reynor’s work is first-rate throughout, but there is an abundance of slack in the early narrative.