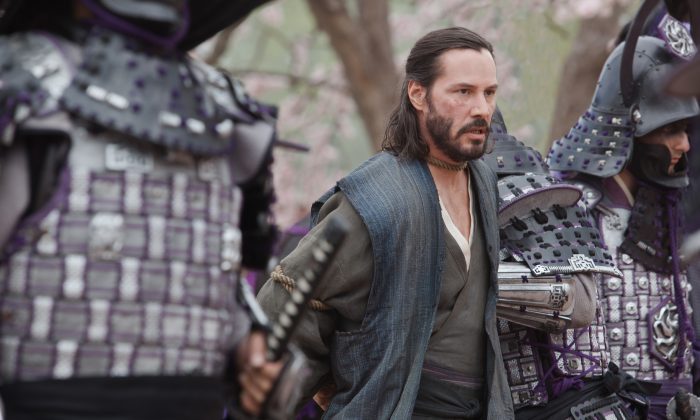 Keanu Reeves is not his best in the action-adventure '47 Ronin.' (Frank Connor/Universal Studios)
Entertainment

’47 Ronin’: Too Much Money and Tinkering

There’s no such thing as good Jack and bad Jack (Nicholson). There’s only vintage Jack and current Jack. It’s almost biblical. “Let there be Jack. And Jack was good.”

Keanu? That’s a different story altogether. One would not be wrong in stating that while there is good Keanu, and great Keanu, there is also… less good Keanu.

Good Keanu is either hysterical, or really, really Keanu-sious. That’s when Keanu enters the Keanu-state. Which is his very own dimension of Keanu-ity. You know what I’m talking about.

Examples of Keanu-ity: The “Matrix” line where he wakes up and says, “I know kung fu.” Or, (also from the Matrix) leaping from one rooftop to another and saying, “Whoa.” Nineties surfer-speak by way of grunge by way of… whatever that thing is, that he does, so well, that no one else can do it. Only him. That’s why he’s a movie star. You know what I’m talking about.

Now, few would argue that while the essential Keanu-ity is a mind-altering experience, bad Keanu is depressingly over-earnest and glum. But we’re always ready to forgive him. As long as gives us a good “whoa” every once in a while, he can get away with at least three bad movies.

“47 Ronin” is one of those three. It’s not horrible. Pretty close, though. It’s got low-level CGI, a contrived, incoherent script, no character development, no tension whatsoever, and bad Keanu.

The movie claims that “47 Ronin” is one of Japan’s greatest legends, and then they go and manufacture Keanu as a gaijin hero named Kai. “Gaijin” is the Japanese word for the Mexican “gringo.” An outsider. Totally contrived. Already off to a bad start.

It’s a tale of honor and revenge. Ancient Japanese mores, however, don’t make much sense to the modern mind.

Take the custom of seppuku, for instance. Who in their right mind would actually desire to disembowel themselves and call it honorable?

It’s the scriptwriter’s job, as well as the director’s job to explain the context and reveal the deeper meanings, so that we might learn from such mores. This service is not provided.

The Revenge of the Ronin

An 18th century feudal lord was required by the emperor to commit seppuku after attacking a crooked court official. The 47 samurai in the lord’s service automatically become ronin, a lowly, shamed warrior-caste similar to the Indian “untouchables.”

Again, there’s no way the modern American mindset can understand this. It’s like if a Navy admiral punched someone at the Pentagon, all the Navy SEALS would get kicked out of the Navy and have to go work at McDonalds. Not that working at McDonalds is a bad thing.

Anyway, these particular ronin don’t roll over and die; they plot revenge for their dead master. What do they get to do after pulling off their plan? They obtain the emperor’s blessing to regain their honor. We won’t say how.

Universal Pictures spent nearly $225 million on “47 Ronin.” Famed director Steven Spielberg recently warned that it might only take a few of these behemoth-budget blockbuster-wannabes to “implode” the system and bring Hollywood to its knees, and, hopefully, senses.

If any studio makes a few “47 Ronin”-like movies in a row, Spielberg’s prediction will come true. And we can finally get back to the business of finding good scripts and sensible directors to allow Keanu to bring the great and mind-altering Keanu-ity.