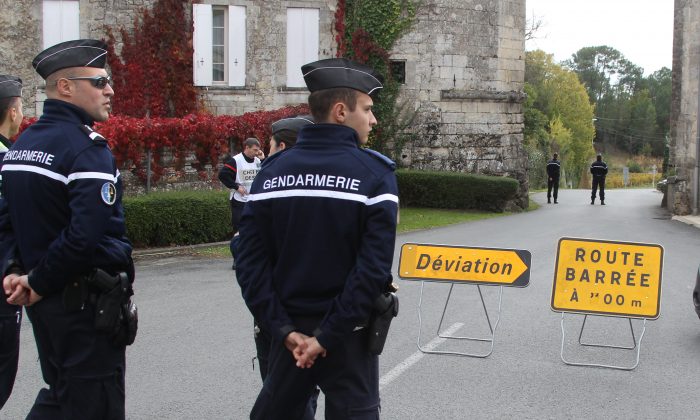 French gendarmes prevent media access to the site of a bus crash in Puisseguin, near Bordeaux, southwestern France, following a road accident in which at least 42 people were killed, Friday, Oct. 23, 2015. (AP Photo/Bod Edme)
Europe

PUISSEGUIN, France—A truck and a bus transporting retirees on a day trip collided and caught fire Friday in wine country in southwest France, killing 42 people and badly injuring four others, authorities said. It was the nation’s deadliest road accident in more than 30 years.

An image released by BFM television showed the carcass of the bus — nothing but a collapsing, charred frame engulfed by smoke. Firefighters fanned out along the narrow country road, between a wooded area and an upward slope near the village of Puisseguin, about 50 kilometers (30 miles) east of Bordeaux.

Eight people, including the driver, escaped from the bus after the driver opened the door, but others were trapped as the blaze consumed the vehicles, Puisseguin Mayor Xavier Sublett said on i-Tele television. The four injured were among those who escaped. French media said the truck driver was killed.

The mayor said later on RTL radio that the truck driver lost control of the vehicle. The bus driver “tried to avoid it, but the truck came and hit it, and he couldn’t do anything except activate the mechanism to open the doors to allow some people to get out,” Sublett said.

Other authorities remained cautious about the circumstances of the crash. The top government official for the Aquitaine region, Pierre Dartout, told reporters an investigation is underway, and Interior Ministry spokesman Pierre-Henry Brandet said it was too early to know what exactly happened.

Police said the death toll was unusually high because both vehicles caught fire.

Helicopters were evacuating severely burned victims, and scores of emergency workers were at the scene. Prime Minister Manuel Valls and Interior Minister Bernard Cazeneuve were heading to the site.

The truck was carrying lumber, according to BFM television. The bus was carrying retirees from the town of Petit Palais on a one-day tourist trip to another area of southwest France, legislator Gilles Savary said. It had traveled just seven kilometers (four miles) when the collision occurred.

The weather in the region was overcast Friday morning but not rainy.

Calling it an “immense tragedy,” French President Francois Hollande promised an investigation into what happened. He also expressed “the solidarity of the whole nation” with loved ones of the victims.